Edit
watch 02:05
Wiki Targeted (Games)
Do you like this video?
Play Sound
“You took that beautiful music from us, and left us nothing!”

The Mother is a unique awoken broodmother who leads the darkspawn attacking the arling of Amaranthine. She was a former human female prior to becoming a broodmother.[1]

It is unknown who the Mother was before she became a broodmother, however there are some hints about how she was transformed: the darkspawn forced her to devour her own family during the process. When the Architect awoke her, freeing her from the Call of the Old Gods, she remembered what she once was and what she had been forced to endure, and that realization drove her into madness.[2]

The Mother longs for the "sweet music" of the Archdemon because that song was the only thing that allowed her to remain unaware of what she had become. Enraged at the Architect, she convinced those Disciples who feel like her to oppose the Architect's goals, while she strives to re-connect herself and her loyal darkspawn to the Calling.[2] The Mother hopes that if the Architect is destroyed, the "Song" will return to her. She also wants to be destroyed, as she believes that in death she will be able hear the music again.[3]

It is unknown if her ability to use magic, that is unique among broodmothers, is because she was a mage when she was a human, or if its a secondary effect of her awakening. Regardless, however, this unique ability allows the Mother to change her own offspring into the horrific Children, instead of just birthing hurlock darkspawn like the other broodmothers of human origin.[3]

This section contains spoilers for:
Dragon Age: Warden's Fall.
The Mother is responsible for the disappearance of Blight refugees in the arling of Amaranthine. This is because of her growing powers, that increase her hunger. Her followers are working with a Fereldan smuggler named Cyril to get as many refugees as possible.[4]

The Mother controls one faction of the Disciples, as well as a large number of unawoken darkspawn. Most importantly, the Mother is the one breeding the Children. The Mother begins sending darkspawn to assault the arling of Amaranthine as part of her conflict with the Architect. To remove any obstacles preventing her from confronting the Architect, she attempts to eliminate the Grey Wardens in Ferelden. To remove the Warden-Commander, she dispatches one of her disciples, the First, to strand the Wardens in the Fade by luring them into a trap at the Blackmarsh. The Mother deliberately fails to disclose that the First will also be trapped there, believing she is doing him a favour by allowing him to 'hear the song again'.

She also charges another Disciple, the Lost, with defending Kal'Hirol where she houses several unawoken broodmothers of dwarven origin, who provide darkspawn troops for her. However, although the Architect's darkspawn are repulsed, the mother's darkspawn are slain by the Grey Wardens in the aftermath. With her power base badly weakened, the Mother launches an all out offensive to eliminate the Grey Wardens. The Mother unleashes a horde of darkspawn on the City of Amaranthine to lure the Wardens out, while sending another force, led by the Herald, to lay siege to Vigil's Keep.

The Architect
The Children
The Disciples 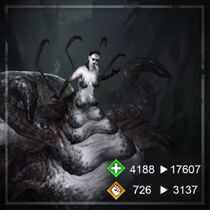 Artwork of the Mother in Heroes of Dragon Age 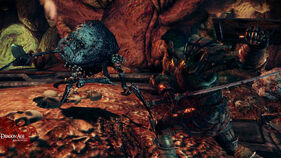