The Loss of a Friend is a side quest from the Jaws of Hakkon DLC for Dragon Age: Inquisition.

Grandin, an Inquisition scout, has disappeared in Frostback Basin. Grandin's friend was recently murdered and Scout Harding is concerned about Grandin's safety.

Speak to Scout Harding after initiating the side quest Jawbreaker. Harding reveals that an Inquisition scout has vanished and requests that they be tracked down.

Scout Grandin's last known location is west of the river camp. A pair of eviscerated Hakkonite corpses can be found here, along with Harding's orders to Grandin found impaled to a Hakkonite's chest by their own sword. Continue heading north-west, along the riverbank, following the trail of dead Hakkonites.

Grandin is eventually found at the ancient Culvert where it becomes apparent he has become possessed by a Rage demon. Grandin can be allowed to leave and wreak further revenge on the Inquisition's enemies, or slain. If fought he is a powerful Rage Abomination with very high health and armour. Cassandra or a Templar specialized Inquisitor can be very helpful with this fight for dispelling barriers and dealing extra damage. Alternatively, mages equipped with Dispel can take down rage demon's barriers.

Last time I wrote, I was whining about going to the Frostback Basin. Yes, I admit to whining. Before we left, I even tried to convince Gerard to take my place. I suppose I was afraid and didn't want to say it.

But now I will gladly say I was an idiot. The journey here has been incredible. I feel like I have a purpose. That sounds pretentious, doesn't it? But I'm finally doing something interesting and important. I've even made friends with some of the Inquisition soldiers. One of them has never been to Val Royeaux. Last year I would have laughed at that, but—he is better traveled than I am, why would I judge him? Even so, I promised to show him the city the next time he has leave from Skyhold.

I may not have time to write again for a while. Everything is so busy here. 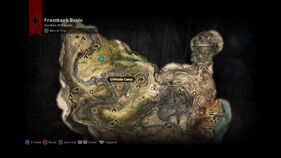 Location of "An Unsent Letter"
Add a photo to this gallery
Retrieved from "https://dragonage.fandom.com/wiki/The_Loss_of_a_Friend?oldid=897699"
Community content is available under CC-BY-SA unless otherwise noted.