The Lone Warden is a companion quest in Dragon Age: Inquisition, whereby the Inquisitor can recruit Blackwall as a companion.

One of Leliana's agents reported a man, calling himself Blackwall, dressed in full Grey Warden regalia and last seen travelling through the Fereldan Hinterlands. With so many Wardens disappearing in the wake of the Divine's death, this Blackwall should be questioned.

Automatically triggered after the main quest The Threat Remains.

Travel to the Hinterlands; Blackwall can be found southwest from the Upper Lake Camp. He is on the opposite (west) side of the nearby lake so the player must go around to reach him. The Inquisitor will find him rallying a couple of conscripts to fight off the bandits, who will attack shortly afterwards. When talking to him after the fight, he offers to join the Inquisition.

Note: Additionally, you can stop at the Crossroads beforehand and speak with a man named Giles, leaning against the path wall between Vale and Whittle, who will give you some information on what Blackwall's been up to and where he was last headed.
Note: Though not a codex, there is a letter found on the body of one of the bandits which provides some background on his story; see gallery below. 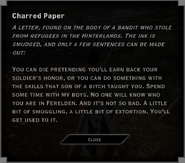