“For almost a thousand years, the world believed it was in the hands of the Maker. And now many believe you are the agent of His will. Whatever the truth is, that belief gives you power.”―Vivienne[1]

The Inquisitor, known to many Thedosians as the Herald of Andraste, is the player-controlled protagonist of Dragon Age: Inquisition. The player will be able to choose the character's race, gender, class, and voice set.[5][6]

The Veil has torn across Thedas. The Inquisitor is the sole survivor of a tear, referred to as "the Breach," that occurs during a peace conference between the leaders of the Chantry and the mage rebellion at the Temple of Sacred Ashes. Finding themselves in the Fade with no memory of how they got there, the Inquisitor remembers being chased by giant spider-like creatures. The Inquisitor notices it had been granted a mysterious magical mark on their left hand which activates when they reach out to a feminine spiritual entity. Emerging from the Breach, the Inquisitor passes out and is captured by Chantry forces. The Inquisitor is interrogated by Cassandra Pentaghast and Leliana, accused of causing the Breach, given that the mark has the same magic as it. The Inquisitor's mark spreads each time the Breach expands- thus slowly killing them. Yet it also has the power to seal the Fade rifts.

After either allying or conscripting the mage rebels or templars, the Inquisitor is able to close the Breach. But the victory is short-lived, as Haven comes under attack by Corypheus. The Inquisitor distracts him long enough for the village to be evacuated before causing an avalanche to bury his army. When the Inquisitor reunites with the Inquisition, the Herald leads them to Skyhold, where the Inquisitor is formally declared their leader.

In 9:41 Dragon, Adamant Fortress is reoccupied by the Orlesian Grey Wardens, who had allied with the Venatori. Sacrificing their own warriors, enthralled Warden mages began summoning demons, ostensibly to march into the Deep Roads to kill the Old Gods. However, the fortress came under siege by the Inquisition, due to the Wardens sheltering Magister Livius Erimond, a member of the Venatori. When the Inquisitor, Hawke and a Warden ally reaches Warden-Commander Clarel, they were able to convince her that Erimond is in league with Corypheus, an ancient darkspawn. In the resulting battle, the Inquisitor, Hawke, the Warden ally and their party accidentally fall into the Fade. There they meet a spirit posing as Divine Justinia V, who is revealed to be the same spirit that was believed to be Andraste and led the Inquisitor to the Breach to escape as they were chased by demons. The spirit briefs the Inquisitor that they are in the realm of a nightmare demon who is controlling the Grey Warden mages and that the Inquisitor must recover the memories it took from them. As the Inquisitor recovers these memories, they remember how the mortal Divine was bound by Grey Wardens and sacrificed to power an orb. The Inquisitor interrupted their ritual and when Corypheus lost control of the orb, the Inquisitor picked it up and gave them the mark. After escaping the Fade with the spirit's help, with either Hawke or the Warden ally staying behind to fight the Nightmare demon, the Inquisitor has the option of either allying with the surviving Wardens or exiling them from Orlais.

The Inquisitor attends a ball held by Empress Celene I at her winter palace in Halamshiral after learning of an assassination plot against her. The Inquisitor's actions resolve the Orlesian Civil War and decide who holds the throne of Orlais.

Facial construction
Add a photo to this gallery

The player begins by selecting a gender, race (human, elf, dwarf or Qunari[9]), voice set,[6] and class (warrior, rogue or mage) for the Inquisitor. (The mage class is unavailable to dwarves.)

Adaar tarot card
Add a photo to this gallery

The Inquisitor is a voiced protagonist. However, unlike with Hawke, the player is able to choose the sound of the protagonist's voice, with two voices available for both genders: one with a Southern English accent and one with a North American accent.[12]

The Inquisitor has a last name, which varies based on race. This cannot be changed, as it is spoken in some voiced dialogues where the Inquisitor is introduced as, for example, "Mistress Adaar."

A default name is offered according to the background and gender, but this can be changed to whatever the player chooses.

The Inquisitor possesses a unique ability to manipulate the Fade, which manifests itself in green light around the Inquisitor's left hand, as seen in the Inquisitor Trailer and the game's cover. This mark is known as the "Anchor," and it is a power the Elder One seeks.[20]

The mark will have improved abilities over time. In addition to the ability to close rifts, the mark eventually gains a power called "Mark of the Rift," an area attack that can banish all demons in the affected range, cause massive damage and potentially kill some enemies in one blow. This power, however, cannot be used all the time, as it is a Focus-based ability.[21] 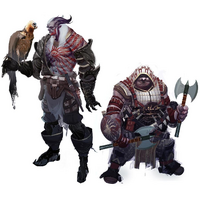 Inquisitor as shown in The Art of Dragon Age: Inquisition cover art 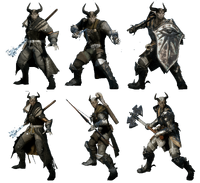 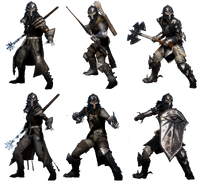 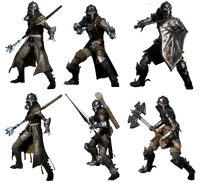 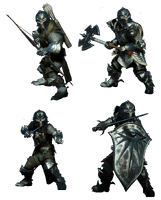 The dwarf Inquisitor
Add a photo to this gallery