The Hawke's Key is a plot item and weapon equipped by Hawke in the Legacy (quest) in the Legacy DLC for Dragon Age II. The identity of the weapon will vary depending on Hawke's class. The damage/dps of the weapon will vary by the level at which Hawke acquires it, but will not increase upon level-up. The bonuses from breaking the seals appear to be affected by level in the same way.

The key is, and always will be, part of the cage that holds Corypheus. The prison's power is tied to that of the key; as the power of one waxes, the other wanes.

The key's origins are lost to time. All we know is that it is an ancient, powerful weapon. The Wardens of old uncovered a few of its secrets—just enough to draw upon its magic to create the seals that hold Corypheus.

Accounts indicate that the key attunes itself to whichever man or woman wields it in the rituals that reinforce Corypheus's chains. It is the nature of the magic, something in the blood. The key is currently attuned to one Malcolm Hawke, the last mage to hold it.

The key is an essential part of strengthening the seals, and also the only thing that can break Corypheus free.

—From Janeka's research notes
—From Codex entry: The Key

The Wardens did not guard the key with care. It was left in a repository, with objects of little worth. Trinkets. Dusty Grey Warden trophies. Not even a guard posted. Fools. If only they knew what they had, and had lost.

It will not wake at my touch; it sleeps and its power remains within. The Great One says it requires Malcolm Hawke's blood to awaken it. Only then can its powers set him free.

I will find the heir to the blood and the Great One will reward me. Yes. Let it be soon.

—From the journal of Rhatigan, leader of the Carta in Kirkwall
—From Codex entry: The Great One's Key

The key is acquired by defeating the Carta dwarf Rhatigan in the Carta Hideout (Legacy). The key is then automatically equipped as a weapon which varies depending on Hawke's class.

During the course of traveling through seals and fighting various Guardians (first one just teleports - the second teleports and spawns replicas of himself, the third and final Guardian spawns a large ring of replicas of himself) you will be prompted to make a choice of weapon enchantments for the above mentioned weapon. These stats may vary by weapon type and Hawke's level when the key is obtained.

Note: It is possible to acquire all the enhancements to the weapon using an exploit. (See exploit, below).

Note: This function can be done for all other seals. The following cutscene will play proportionally to how many bonuses were applied. If you were successful, it will play four times. It is advised to save once before attempting the exploit and once after. Some players have reported trouble getting the cutscene to play four times even when everything else is done correctly. At the first seal, this can be solved by asking about the Calling multiple times each time the player goes through the conversation with Larius. At the other two seals, it may be necessary to select each pillar multiple times; as many as eight to be safe. 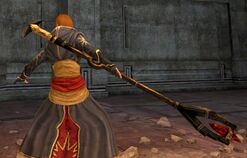 Dagger
Add a photo to this gallery
Retrieved from "https://dragonage.fandom.com/wiki/The_Hawke%27s_Key?oldid=900550"
Community content is available under CC-BY-SA unless otherwise noted.