Edit
watch 02:05
Wiki Targeted (Games)
Do you like this video?
Play Sound
“The Hanged Man - sometimes you want to go where everyone knows your name.”―Isabela

The Hanged Man is a tavern located in Lowtown, in the lower parts of Kirkwall north of the docks. It serves as the home base of both Varric Tethras and Isabela.

The Hanged Man is a major tavern in Kirkwall and the only one accessible to Hawke; it is a popular destination for all people, strangers or residents. The interior consists of one main room and four bedrooms, with an opulent suite currently occupied by Varric. The inhabitants of the tavern will vary, depending on what quests are active and progress through the main plot. Varric seems very interested in owning the tavern.

The tavern got its name because people used to be hanged by their feet at the spot, as Varric explains to Fenris in a party dialogue.

A Friend – appears at night
Alistair – only if Anora was placed on the throne in Dragon Age: Origins and he was exiled
Corff – a Bartender and peddler of rumors
Isabela – when she is not in the group
Maraas – in Act 3
Martin – former raider and friend of Isabela, involved in the quest Finders Keepers
Norah – the waitress
Patron/Drunk Patron
Ser Roderick
Suspicious Lady – starts the quest Secret Rendezvous
Talkative man – a character who breaks the fourth wall
Varric Tethras – when he is not in the group

A Story Being Told/A Rumor Making the Rounds

Plans for the Future

A Ship for Isabela

How to Frame a Templar

The Storm and what Came Before It

No Rest for the Wicked

No Rest for the Wicked 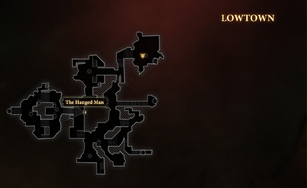 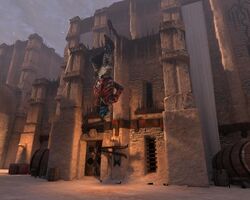 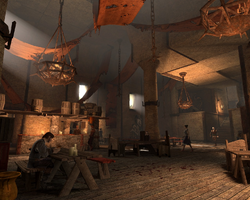 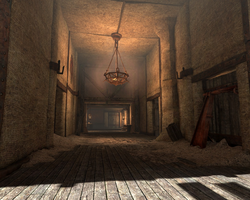 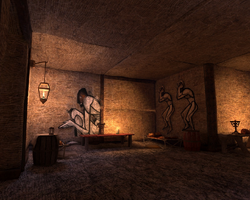 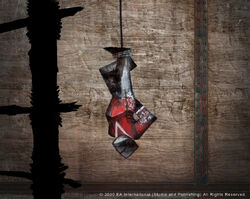 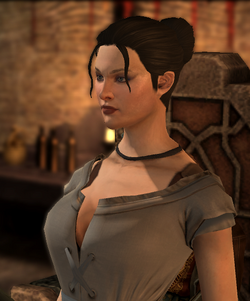 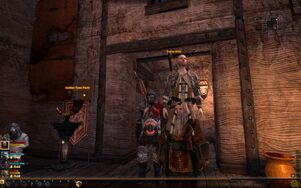 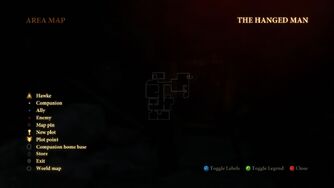