“Orlais presents a veneer of opulence, but the aristocracy are committed to a system of social one-upmanship they call the game. Sprawling receptions delight friend and foe, while bards strike from shadow with insinuation, larceny, and assassination, often to the strange delight of their targets. Control of these auteur agents is yet another layer of the game.” ―From a Fereldan book[1]

The Grand Game, or simply The Game, is the term applied to the politics and machinations of the nobles and rulers of Orlais. Politics in Orlais is an incredibly complicated "game" or "dance" of intrigue, seduction, ambition and scandal, an approach to politics, high culture and morality that is quintessentially Orlesian. The political and familial infighting that characterizes the Game is as common as donning masks in public: indeed, this habit is also an intrinsic part of the Game in its most obvious form. [2]

Among the Orlesian nobility, status and appearance are set above all things. Orlesian culture is renowned for its infighting, with every family engaging on some level in what’s known as the Grand Game.

The Game's purpose is one-upmanship of rival aristocrats, often accomplished through elite proxies called bards. In order to rise in the decadent Orlesian society and among the bloated upper class, much is permitted. The rule of the Game is simply this: all is accepted as long as the player is not caught, up to and including murder. Paradoxically, however, though direct culpability is undesirable, credit and recognition are demanded. Indeed, an individual known as a skilled player is granted discreet respect among his or her peers. Due to this tension the Game is a losing proposition for the uninitiated,[3] and it is said that more blood is spilled in the Game than in any war in Orlais.[4] 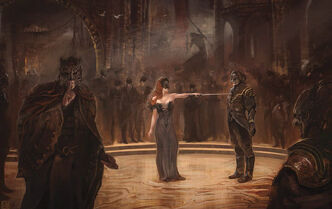 The lower classes are believed by the nations beyond Orlais to resent the Game that ostensibly keeps them demeaned. However, most peasants desire to ascend as well, and the vain hope of accruing a generous patron or sufficient funds to gain a title in the Council of Heralds makes them surprisingly accepting of the Game's excesses. Orlais is much less of a meritocracy than it appears, however, and the Game frequently sorts the wheat of Orlesian society from the chaff.[3]

Also surprising is the presence of the Chantry in the Game. Though normally considered above the Game, the templars and priesthood of Orlais frequently participate in it. Divine Justinia V was reputed to be one of its best players.[5]

The Orlesian nobility is prone to wearing very elaborate masks in public. These masks are hereditary and identify one's family almost as uniquely as the heraldry on a crest: a family might be associated with a lion crest, and matching lion masks will identify them in public. Retainers and servants wear a simpler form of a family's mask. Family symbols are well known among the Orlesian public, and anyone attempting to wear a mask that doesn't belong to their house runs the risk of a quick death if discovered.

Wearing makeup is another popular tradition for both men and women in Orlais. Even chevaliers may wear cosmetics. There is both masculine and feminine makeup, although outsiders may have trouble telling the difference. Makeup can be a strong indicator of social standing. The quality and rarity of one's makeup—uncommon hues and consistencies are prized—speak volumes of one's status.

The Game was originated in spirit by Jeshavis, known as the "Mother of Orlais" and gyoja of the Ciriane tribe of Orlais. She was wife to two of the sons of Maferath and Andraste, and manipulated both to protect her people from Alamarri cultural intrusions.[6]

When Emperor Kordillus Drakon I first established the Orlesian Empire, the local nobility possessed an intricate system of titles. Concerned with the civil instability caused by their often brutal struggle for nobility ranks, Drakon abolished all titles except Emperor, Lord, and Lady. Far from ending the game, however, his actions instead shifted its focus to obtaining tokens of prestige, such as patronages and familial ties. This encouraged the rise of the social infighting that is the raison d'être of the Game.

Prior to her death some time after 9:20 Dragon, the biggest prize in the Game was the favor of Lady Mantillon. She was said to be late Emperor Florian's mistress and the shadow ruler of Orlais who assassinated Florian and, allegedly, enthroned his niece Celene.[7]

Music, masks, cosmetics, and dancing are cornerstones of the Orlesian noble society, so the sprawling masquerade balls naturally become battlefields of the game. Both allies and enemies are traditionally invited to such events, which gave rise to the institute of the Bards: traveling musicians also trained in espionage, larceny, and assassination. Matching wits with them is one of the Game's major thrills, and the nobles welcome bards with open arms even when suspecting ill will. Control of these agents is an important part of the Game.

“We let nobles decide who to blame. We are just the enablers of the game.” ― Leliana, a bard[8]

Bards are proxies, provocateurs, or auteur agents[1] of wealthy patrons in the Game, enacting their will through spying, bribes, seduction and sometimes even assassinations. These men and women are elite players of the Game, serving as minstrels or actors[9] under learned bardmasters, and frequently using others as pawns in their work. Indeed, this attitude infects the lives of the bards themselves, and they may sometimes become victims of fellow professionals if they are seen as losing their edge.[3]

Bards may serve anyone and at any time: mage or priest, king or noble. Indeed, their presence is expected in the presence of power players and at pivotal moments, whomever and wherever they are. This presence, rather than a source of anxiety for their targets, is welcomed as dangerously exciting.[10]

Codex entry: Shadow of the Empire

Retrieved from "https://dragonage.fandom.com/wiki/The_Grand_Game?oldid=792306"
Community content is available under CC-BY-SA unless otherwise noted.