“The first of the magus cast themselves deep in the Fade in search of answers and power, always power. They found the forbidden ones—Xebenkeck, Imshael, Gaxkang the Unbound, and The Formless One. Many conversations were had and much of the fabric of the world revealed. And thus the magic of blood was born.”―Unknown author

The Forbidden Ones are a group of four unique and very powerful ancient demons. It is said that they are older than both the darkspawn and the Tevinter Imperium. Some scholars even believe they taught the Magisters of old how to use blood magic.

A memory in Vir Dirthara portrays the Forbidden Ones as having once held a corporeal form. However, during an unknown calamity that swept across Elvhenan, they abandoned the People and gave up their physical forms to become mutable spirits. Thus the Evanuris exiled them from their lands. Familiarity with shape allowed them to travel the shifting paths of the Fade unaided.[1]

Gaxkang the Unbound is the final boss encountered during the Unbound questline. He can be confronted in the Quaint Hovel located in Denerim's Dirty Back Alley.

Xebenkeck is the final encounter of the Forbidden Knowledge questline. Hawke discovers five tomes hidden across Kirkwall; if the tomes are destroyed, a new location will appear in Darktown leading to a final tome and an encounter with Xebenkeck (reading or looting any of the prior tomes prevents the questline from completing). As of patch 1.04, the final tome can be read allowing for the quest to be completed. In doing so it awards the +2 attribute points (Tome of the Mortal Vessel) as if the five prior books were read.

When final the tome is read, Xebenkeck will appear, be prepared for a difficult fight consisting of two waves of enemies. These include two rage demons, several abominations (on Nightmare difficulty), and Xebenkeck (who will continuously heal them) will appear immediately. Two additional rage demons, several additional abominations (on Nightmare), and a revenant will also spawn as soon as either Xebenkeck or one of the rage demons from the first wave are destroyed. Defeating all enemies awards the "Exorcist" achievement or trophy and some minor treasure will appear in the room. Xebenkeck drops the staff Voracity, a powerful fire staff that boosts both attack and blood magic.

If Xebenkeck and the rage demons are defeated sufficiently far from the tome room (they can be kited back to the entrance of the cavern without issue) the party will drop out of combat. However, the remaining demons must still be defeated in order for the achievement or trophy to be granted.

This section contains spoilers for:
Dragon Age: The Masked Empire.
Imshael was summoned by Keeper Thelhen so that his Dalish clan could unlock the secrets of the Eluvians for them. Thelhen refused to pay Imshael's price for activating the Eluvians however and imprisoned the demon in a circle outside the camp. Eventually Imshael was released by Ser Michel de Chevin and after creating a gem to activate the Eluvians, escapes its binding and slaughters most of the clan before possessing Mihris. Imshael eventually leaves Mihris and escapes to parts unknown. Ser Michel vows to pursue Imshael to atone for his part in the destruction of the clan and sets off to hunt the demon.

Imshael reappears in Emprise du Lion and is encountered during the quest Call Me Imshael. Ser Michel is still pursuing him and asks the Inquisitor to assist him with defeating the demon. Imshael in the mean time has taken up residence in the Suledin Keep and is assisting Corypheus and the Red Templars in cultivating red lyrium.

When the Inquisitor finally confronts Imshael, the demon will offer a deal:

Codex entry: Vir Dirthara: Exile of the Forbidden Ones

Band of Three
The Forgotten Ones 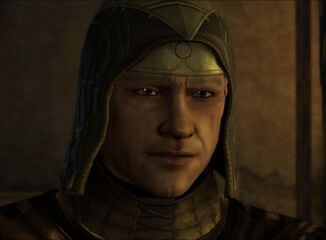 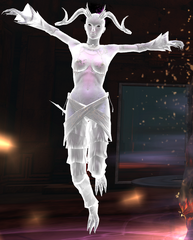 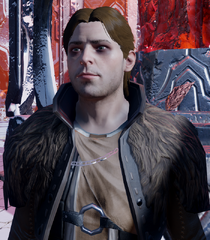