"Darvaarad" is the Qunari term for a magical quarantine site. They are managed by the branch of Ben-Hassrath called "Dangerous Purpose" who are lead by Viddasala.[1] One of such sites was used in the conspiracy called "Dragon's Breath". The eluvian leading to it from the Crossroads was protected with a keystone and a password: "maraas nehraa".[2]

The Qunari in the Darvaarad both investigated inner workings of the eluvians[3] and brought in, cataloged[4] and studied various artifacts, including red lyrium, astrariums, ocularum, ancient elven statues and murals.[5] They stockpiled knowledge and power, which allowed them to open so many mirrors.[6] Saarath was one of the Qunari involved in the research.[7]

The site also served as a base for elven and human spies[8] and a gaatlock factory. The Qunari contained a dragon they called ataashi in the Darvaarad's biggest chamber and used its venom to create the explosives quickly and in large quantities.[9]

The Inquisitor and their companions enter the Darvaarad through the eluvian in the Crossroads. As they make their way forward under heavy resistance, the Inquisitor inspects evidence of Qunari activities within the "Dragon's Breath" plan. In the Research Tower the Inquisitor finds elven artifacts, including a puzzle required for the "Lateral Thinker" achievement and a self-portrait by Fen'Harel.

Inside the gaatlock factory the Inquisitor sees the ataashi through an arch and realizes its purpose. Viddasala arrives to give orders to her forces. She then tells Iron Bull to attack the Inquisitor. If his Chargers were sacrificed, or the Inquisitor chose not to follow up on the Demands of the Qun at all, he cannot be swayed from the Qun even if romanced and fights to his death. Otherwise he readily refuses to follow the order.

As the Inquisitor reaches the last chamber, they can either kill or release the dragon, thus foiling the Qunari plan. Viddasala and her men prepare to flee via an eluvian when the Inquisitor's hand starts acting up again. Taking pity on them, she turns to provide some revelations: Solas is the agent of Fen'Harel, he gave the orb to Corypheus and pushed a dying Qunari into the Winter Palace for the Inquisition to find. Viddasala promises to kill Solas and disappears in the mirror.

Amulet of Physical Immunity - looted from a chest in the storage room of the Darvaarad Barracks.

Belt of Retaliation - looted from an enemy in the Courtyard.

Superb Belt of the Winter Pact - looted from a chest in the Darvaarad Barracks. 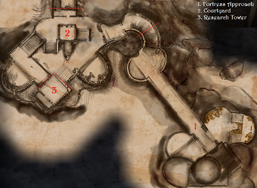 Map - outside the keep

Map - inside the keep 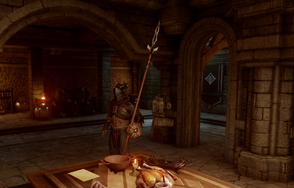 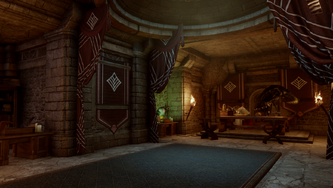 The supervising Ben-Hassrath's study
Add a photo to this gallery

Retrieved from "https://dragonage.fandom.com/wiki/The_Darvaarad?oldid=886428"
Community content is available under CC-BY-SA unless otherwise noted.