The Darkspawn Chronicles is a DLC for Dragon Age: Origins.

This campaign provides an opportunity to play as darkspawn. Instead of the Warden, the player controls a Hurlock vanguard who serves as a champion to the Archdemon. It takes a look at an alternate history, allowing the player to see what might have happened if the Warden had died during the Joining ceremony, and the assembled forces marched under Alistair's command instead.

You now fight as the darkspawn! The city of Denerim, jewel of Ferelden, girds itself for war. As a hurlock vanguard, you alone hold the power to make thralls of your fellow darkspawn and drive them into the heat of battle. Heed the Archdemon's call--Denerim must burn!

In a non-canonical narrative in which the Warden died at Ostagar and Alistair travelled onwards without his comrade, the Vanguard is summoned by the Archdemon himself to lead the darkspawn to victory at The Battle of Denerim. Receiving orders through the Archdemon's whispers, the campaign begins storming the gates of the city.

First enthralling two nearby Genlock and Hurlock warriors, the Vanguard has to earn their respect by slaughtering Denerim City Guards and Mabari War Hounds; he then rescues a nearby Ogre. Eventually, Arl Howe appears with his bodyguards, including Ser Cauthrien, to rally the defenders, but is killed by the Vanguard's forces. The darkspawn then finish off the remaining defenders before pressing ahead to the Market District.

The Archdemon warns that three large ballistae had been set up to keep the darkspawn out of the district. The Vanguard enlists the aid of a nearby Shriek, using its stealth ability to sneak past the ambush. From there, the player has the opportunity to slaughter various civilians, including Vaughan Kendells and Habren; the main enemies in the area are Bann Teagan, Ser Perth and the Knights of Redcliffe. To enter Denerim Alienage, the Vanguard needs the help of a Genlock Sapper. The sapper can destroy the gates leading into the Alienage, but the opportunity to kill Herren and Wade also surfaces; however, if driven to the back of the Chantry Walls, Herren will transform into a Desire demon, and teleport them both away. Outside the Gnawed Noble Tavern is a gang of violent drunks led by Oghren, and the Vanguard can kill them as well. When the Sapper destroys the gate, the Vanguard's forces are halted by Wynne and templars under the command of Cullen and Knight-Commander Greagoir. They are defeated, and the darkspawn continue their rampage into the Alienage.

After the Vanguard breaks through the gate into the Alienage, the Archdemon provides new orders: burn the Vhenadahl tree to draw the City elves out. To accomplish this the Vanguard commands the aid of a Hurlock emissary. After the emissary sets the tree alight using fire magic, the darkspawn slaughter Elder Valendrian and the other City elves who were sent into a blind panic by the destruction of the tree. Also among the elves is Zevran, who is hiding from the Antivan Crows among the elves. Cutting the last of the Elven Defenders down, the Vanguard's forces press on to the Palace District.

While the Alienage was left to fend for itself, the Palace District is swarming - the Dwarves are spread throughout the district, alongside the Legion of the Dead and numerous Steel golems and many Qunari Mercenaries. The Ogre is cut off from his fellow darkspawn behind a portcullis, and the Vanguard has to raise it. Despite the odds, the Vanguard successfully kills Kardol and Sergeant Kylon - but Riordan wounds the Archdemon before plummeting to his death; the Archdemon orders the Vanguard to continue the fight. Finally, the Vanguard is confronted by Sten on the steps leading up to Fort Drakon; the Vanguard emerges victorious once again.

The Archdemon, sensing Alistair's approach and aware of his own injuries, demands the Vanguard's presence at the top of Fort Drakon immediately. Answering his master's call, the Vanguard meets his foe: King Alistair, the leader of the assembled forces, followed by his loyal dog Barkspawn and accompanied by his ally-of-convenience Morrigan and his friend and lover Leliana; Alistair is backed up by the werewolves. Fighting alongside both the horde and the Archdemon, the Vanguard kills the dog, Morrigan and Leliana before mortally wounding Alistair. After the battle is over and Alistair realises he had failed, the Vanguard stabs him viciously through the back as the Archdemon soars off, the battle of Denerim a success.

Massacre in the Market

Assault on the Palaces

The Battle at Fort Drakon

The following items are carried over to new or existing games after completing The Darkspawn Chronicles:

Although he isn't seen until the very end, many of the decisions that Alistair made as the sole surviving Grey Warden can be gathered from the codex entries and the presence of certain characters seen throughout the DLC. 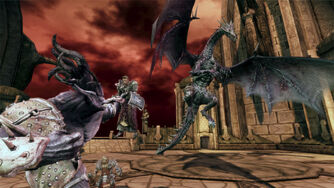 An ogre attacking Alistair, with the Archdemon in the background. 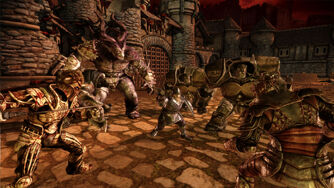 Darkspawn vs dwarf and golems. 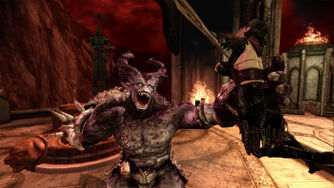 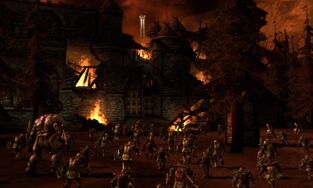 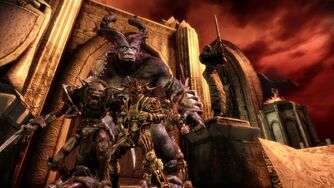 Hurlock vanguard and thralls arrive at the top of Fort Drakon 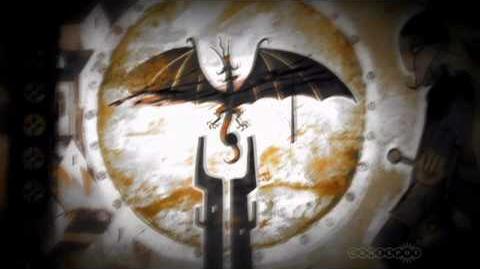