The Cult of the Sky is a quest in the Mark of the Assassin DLC for Dragon Age II.

The quest is obtained from a lost scholar at the southernmost point of the Hunting Grounds - West, past a clearing with three ghast nests.

The scholar has been researching the Cult of the Sky, and explains that one of their altars is in the area. He asks you to take up the search and hands you his notes.

Note: The quest will not be affected if the altar has already been discovered and the enemies have been defeated.

After speaking to the scholar, a plot point appears on the map leading to the altar. Interacting with it reveals a chest with treasure inside. There are two possibilities:

Once you have defeated all enemies, interacting with the altar again will allow you to take the Cult's treasure.

Note: Even if the sky horror has been defeated before finding the scholar, returning to the altar and interacting with it again is necessary before the treasure appears. The treasure will not appear without the quest having started.

The Sky Horror is a Boss-ranked Arcane Horror by a different name, and carries the corresponding resistances. The fight is one of the most challenging in Dragon Age II, particularly on Nightmare difficulty.

While fighting it, Cultists will emerge from shadowy portals on the sides to aid it. After it loses 1/4 of its health, it immediately teleports to safety, leaving you to fight even more Cultists including an Assassin. The Sky Horror uses two spells that deal massive area damage around it, one of which has a very small casting time. Therefore, using melee characters against it is not recommended at all.

One strategy against the sky horror involves the typical kiting/barraging, but with a slight twist. This procedure is recommended because its massive health bar, in combination with lethal spells as a caster/destroyer, makes the fight punishing and unusually lengthy.

Because of its rank, the Sky Horror is very resilient, nigh-impervious to even the most forceful/impacting/debilitating attacks. As a result, conventional controlling strategies have little effect, and the Sky Horror will unload area wide spirit spells. Even a Rune of Spirit Warding, reducing this damage by 90 percent, will be little comfort.

With the effects of this high damage + high health combination known, a straightforward strategy can be prescribed:

Other than this, their are still a good dozen+ enemies to contend with, including no fewer than four Elites:

All things considered, the fight is completely avoidable if you want the quest completed in your journal. Simply don't take the book and you won't even have to fight them, you'll obtain everything of value from only taking the dagger and belt.

Girdle of the Skies

Codex entry: The Cult of the Sky, from the Book of the Lady

A Sky Horror in Heroes of Dragon Age 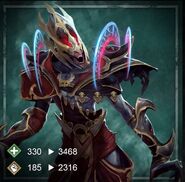 Artwork of a Sky Horror in Heroes of Dragon Age
Add a photo to this gallery
Retrieved from "https://dragonage.fandom.com/wiki/The_Cult_of_the_Sky?oldid=798942"
Community content is available under CC-BY-SA unless otherwise noted.