Edit
watch 02:59
Wiki Targeted (Games)
Do you like this video?
Play Sound

For the village in Hinterlands, see The Crossroads (Hinterlands).

The Crossroads are a nexus of magical mirrors, referred to as eluvians. It is a place where all eluvians join[1], although not necessarily directly.[2]

“It's not the Fade. The runes are elven. If I had to guess, I would say that our ancestors actually created some sort of tiny world between the eluvians.”―Felassan[3]

The Crossroads are a separate dimension beyond the waking world and beyond the Fade.[4] It is described as one of the "places between," pockets within the Fade with their own rules of reality formed by ancient elves from the fabric of time and space. Its true name was lost to time, and Morrigan coined its current designation. The Crossroads were the means by which ancient elves traveled.[1]

Some of the eluvians in the Crossroads were left unlocked[1], but most were sealed by ancient elves during the infighting to prevent sudden attacks.[5] Currently the place is deteriorating, and eventually it will collapse on itself.[1] Modern elves experience the Crossroads differently from other races: the colours are brighter and the trees are in bloom.[6] Elves find the place welcoming while humans suffer physical discomfort from the twisting light and the insistent noise.[3]

In the aftermath of the Fifth Blight, Morrigan (and possibly Kieran and the Warden) escape through the eluvian she has restored and the Crossroads to evade potential pursuit by Flemeth.

During the War of the Lions two groups travel through the Crossroads. Celene and her companions (Briala, Felassan and Michel) have the keystone from Imshael and are attempting to return to Val Royeaux, while Gaspard and his companions (Mihris, Remache and Lienne) are pursuing them. The groups eventually conclude a truce. They defeat a varterral in the central chamber together. As previously agreed, Celene's champion and Gaspard then duel for the fate of Orlais. While they are at it, Briala steals the keystone and claims the eluvian network for herself.

Morrigan brings the Inquisitor to the Crossroads through her eluvian in Skyhold. She explains that Corypheus seeks a similar mirror in an elven temple within the Arbor Wilds to enter this place. Although the Crossroads are not actually the Fade, they are very close to it. Someone with enough power could tear down the ancient barriers and walk the Fade in the flesh. Morrigan then insists on stopping Corypheus together.

In 9:44 Dragon the Qunari have gained control over a part of the eluvian network, and are using the Crossroads to facilitate their invasion to Southern Thedas. They stumbled across it independently.[7]

After finding a dead Qunari in the Winter Palace during the Exalted Council, the Inquisitor follows the blood trail and discovers an active eluvian. The Crossroads appear less hazy than two years ago and are made of islands floating in the space with no bottom.[8] Mysterious red items allow to recreate paths between the ledges and gain access to more eluvians as the story progresses.

After the defeat of the Qunari plot, is it revealed that Briala has lost control of her eluvian network, and that now the Crossroads are under sole control of Fen'Harel.[7]

Books in the Crossroads

Map of the Crossroads 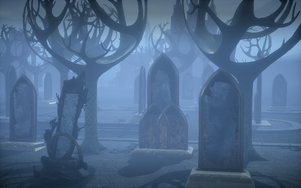 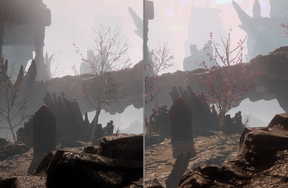 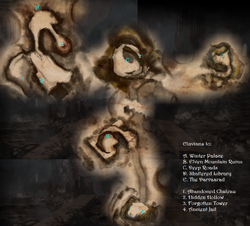