The Breach is a massive tear in the Veil that allows multitudes of demons to escape from the Fade into the world. It appeared in the sky above Haven after an explosion during the Conclave in 9:41 Dragon, above the Temple of Sacred Ashes.

What does it mean to pierce the Veil, that which separates our world from the realm of dreams and demons? For the average man and woman, it is a frightening thought to consider just how fragile this separation actually is.

The Veil is not a physical curtain, not a structure limited to a particular place—it is everywhere. It is in their home, in the streets where they walk, in farmers' fields as well as remote mountain vales. At any moment it could be torn to shreds, allowing demons and other horrors to flood into our world like water through a burst dam.

Known lore tells us that small rifts can be sealed... but what about a large one? What if some catastrophic magical event created a rift so large and horrific, it weakened the integrity of the Veil as a whole? Such a "breach" would threaten our entire world, turning concerns about occasional demonic intrusion into a charming anecdote compared to the monsters we would then face.

If there is anything to be done, any reason we should look at magic with fear, it is for that possibility more than any other.

—From The True Threat of Magic by Lady Seeker Alandra Vael
—From Codex entry: The Breach

The breach destroyed the newly rebuilt Temple of Sacred Ashes and killed everyone in attendance, save one.

The Breach was created by the Elder One using Divine Justinia V as a sacrifice to power the ritual as part of his greater goal to become a god. In the course of the ritual, the future Inquisitor walked in on the Elder One and accidentally received the Anchor from the Orb of Destruction. Touching it caused an explosion that destroyed the Temple of Sacred Ashes, sundering the Veil across southern Thedas, and creating multiple Fade rifts--the largest being called the Breach. As a result, demons and spirits leaked through the Fade to a Thedas embroiled in the Mage-Templar War and the Orlesian Civil War, driven mad by their transition into the physical world.

The Breach and the Fade rifts have also flooded the world with surplus magic which has led to the creation of new schools of magic. The Mages' Collective learned that the excess magic has altered the conventional rules of magic. After extensive study of the Fade rifts' effects, the Mages' Collective founded the Rift Mage discipline.[1] Magister Gereon Alexius also discovered that the Breach was a wellspring of magic that could make limited time travel possible[2] and has exploited this new magical innovation to manipulate the rebel mages into indenturing themselves to him and his Venatori masters.[3]

The Breach itself expanded every hour, and being tied to the Anchor, it slowly began killing the Inquisitor. The Breach's growth was temporarily stopped by the the Inquisitor, who lacked enough power to seal it at the time. The reformed Inquisition is charged with closing the Breach, and towards this end can recruit either the Templar Order to suppress it or the rebel Mages to increase the power of the Anchor. Their efforts are eventually successful, leaving a scar in the sky.

When Corypheus' army was decimated and his attempts to acquire an eluvian to enter the Fade were thwarted, he created a larger, more powerful Breach to lure the Inquisitor into an ambush, knowing that the Inquisitor alone could close it and that failing to come would doom all of Thedas. The Inquisitor used the Anchor to rip the Orb of Destruction from his grasp and sealed the Breach once and for all. 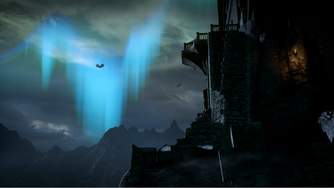 The resulting "scar" left by the breach. 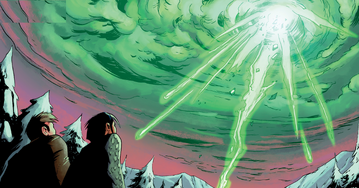 Another view of the Breach opening