For the quest of the same name, see The Bone Pit (quest).

The Bone Pit is a large quarry located outside of Kirkwall. It consists of several mazelike caverns and abandoned mines.

When the region was under the occupation of the Tevinter Imperium, the area was originally known as The Maharian Quarry. During this time, slave labor was used abundantly, as in most of the Imperium, to mine within. One noteworthy Overseer of the quarry had slaves fed to his dragonlings, presumably as a punishment. Some worried that the deaths in the mine had thinned the Veil. It was at this time that it acquired the name "Bone Pit."

In Act 1, Hawke receives a letter from Hubert, an Orlesian Hightown merchant. Hubert offers Hawke a reward for finding why production in the quarry has stopped. Hawke finds that the quarry has been overrun by dragons, released from a cavern during mining, who have slaughtered many of the workers. Hawke clears out the mine and returns to Hubert, who offers Hawke a partnership in the quarry as a reward. If Hawke accepts, they convince the miners to return to work.

During Act 2, Hubert will mention that there is a pest infestation at The Bone Pit and ask Hawke to investigate. When they travel to the Bone Pit, Hawke will find Jansen, the miner rescued during Act 1. He alerts Hawke to troubles in the Bone Pit, which Hawke can resolve to improve production of the mines.

In Act 3, Hawke returns to find the Bone Pit scorched, the workers slaughtered by a high dragon. Upon slaying the dragon and returning to Hubert, Hubert declares he is tired of dealing with the quarry, at which point Hawke can ask for it as payment.

The Bone Pit - a secondary quest.

Remains of the Outlaw "Bearded Beast" - a "fetch" quest.

Cavern of Dead - a secondary quest.

Pick Up Pickaxes - a secondary quest.

Forbidden Knowledge - a side quest.

Mine Massacre - a secondary quest.

Justice - a companion quest for Anders.

The resources listed below can be obtained in the outside area. Resources found in caves are listed on their respective pages.

Elfroot - found on the far east end of the map.

Deathroot - on the right near the entrance.

Glitterdust - in front of the second mine entrance toward the east.

Dragon's Blood - looted from the high dragon's corpse during Mine Massacre. 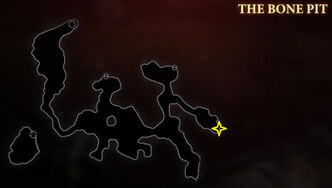 A map of The Bone Pit 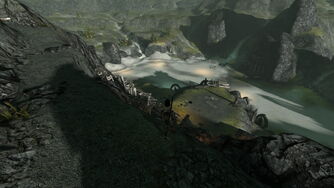