The Ballad of Lord Woolsley is a side quest in Dragon Age: Inquisition

A young man is distraught that his family's special ram, Lord Woolsley, has wandered off. He is offering a reward for the ram's return.

To obtain the quest talk with One-Eyed Jimmy in Redcliffe Village about his missing ram, Lord Woolsley. The side quest the Lone Warden must be completed prior to this quest becoming available.

Go to the marked area on the map and look around for a unique colored ram. Approach it and the quest will complete. Return to One-Eyed Jimmy for additional XP and Influence. (or)

Attack and kill Lord Woolsley to reveal its true form, a masquerading rage demon (the demon will scale to the party's average level).

Note: Lord Woolsley cannot be killed once he returns to Redcliffe Village.

Cole Approves (only if the quest is turned in to One-Eyed Jimmy; Cole does not have to be in the active party)

When killed, the quest journal updates: "Lord Woolsley was defeated. The ram's owner must never learn the terrible truth." only if the quest is active - One-Eyed Jimmy will no longer talk with the Inquisitor from this point on; though Lord Woolsley will keep spawning in the same area and dropping the same items. 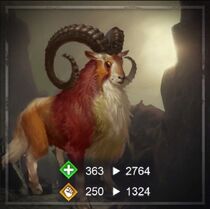 Artwork of Lord Woolsey in Heroes of Dragon Age
Add a photo to this gallery
Retrieved from "https://dragonage.fandom.com/wiki/The_Ballad_of_Lord_Woolsley?oldid=890054"
Community content is available under CC-BY-SA unless otherwise noted.