“I do not seek to rule my brethren. I only seek to release them from their chains.”

The Architect is a unique darkspawn emissary, seemingly being the first darkspawn to develop a will of its own. It is unusual in that it does not appear to be subject to the call of the Old Gods, nor to any other darkspawn compulsion.

The High Priest of Beauty, Architect of the Works of Beauty, designed
Every work and wonder of the Imperium according to the plans of his god.
To him, the Conductor went in secret, armed
With the whisper of Silence.

—From the Chant of Light[1]

In an unsigned Grey Warden Report,[2] the Architect is theorized to be one of the Magisters Sidereal, those Magisters who physically entered the Golden City in -395 Ancient.[1] With no evidence contradicting otherwise, it was henceforth assumed as truth.

The Architect was the High Priest of Urthemiel and the leader of the Builders "who constructed monuments to the glory of the gods" according to the Great Plan.[1]

All seven magisters who reached the Golden City were tainted and cast back to Thedas as the first of the darkspawn. Unlike Corypheus, who was imprisoned and retained his memory of his prior life, the Architect seems to have forgotten his mortal life, knowing only that he is a unique darkspawn.

Its ultimate goal is to bring peace between the darkspawn and the other races of Thedas at any cost. Its first plan was to find a middle ground between the darkspawn and the population of Thedas. It believed to have found that solution in the Grey Wardens, being slowly corrupted by the taint they take in during their Joining, and resolved to spread the Blight over all of Thedas, regardless of the extraordinary death toll in those who would not survive the process.

It worked together with Bregan as well as First Enchanter Remille and his mages to spread the taint through enchantments in the major human cities. It gained Bregan's and Genevieve's assistance in its plans by promising to to locate and kill the Old Gods before they would be turned into archdemons, thus ending all future Blights forever.
This section contains spoilers for:
Dragon Age: Origins - Awakening.

The Architect eventually learns that through the intake of Grey Warden blood in a process it likens to the Joining, it is possible to free other darkspawn from the group mind and give them self-control, intelligence, and free will.

In its discussions about its goals with the Warden Commander, it does not mention its previous plan to force the taint upon Thedas and appears to instead wish to give Warden blood to all darkspawn in order to free them from the call of the Old Gods. 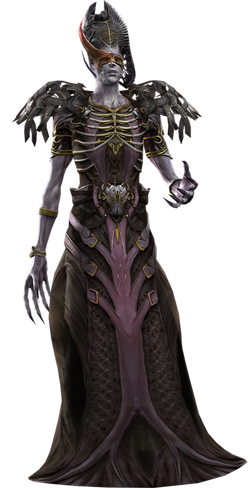 The Architect encounters Bregan after the darkspawn capture and take him to a prison cell in Kul-Baras. It begins to explain the situation to Bregan, and attempts to persuade him away from his suicidal path. However, Bregan soon attempts an escape, only to be re-captured shortly after.

The Architect later awakens Bregan back in his cell. It further explains that the taint is rapidly spreading through his body, and will eventually turn him into a darkspawn-like hybrid. It explains its plans to use the Grey Wardens in a way to bring lasting peace between the darkspawn and the other races of Thedas. It then leads Bregan through the Deep Roads and offers him a chance to escape. Bregan is swayed by this and agrees to aid the Architect in its plans.

The Architect then accelerates the taint in Bregan's body to a point that upon his next awakening, he finds himself very similar to a hurlock. Bregan seeks out the Architect in a room that it has converted into a library. There, the Architect further explains its plan in full: to use the taint on all of Thedas and to kill the Old Gods before they can be turned into archdemons, thus ending all future Blights and creating a lasting peace between darkspawn and other races. It states that it is aware of the large death toll this course will involve and adds that the sacrifices will be necessary.

The Architect meets with Bregan and Genevieve as she is heading through the Deep Roads by herself. Bregan is able to persuade her to listen to it, although he counsels it to keep her in the dark about that part of the plan that would infect the surface with the Blight. After Duncan, Maric, Kell ap Morgan, Hafter, Utha, and Fiona are captured, it tries to persuade them as well to join its cause; only Utha complies. It then uses its magic to accelerate the taint in Utha and turn her into a darkspawn in mere moments. The others, however, refuse, and are left to themselves. They eventually escape to the surface, save for Kell and Hafter who sacrifice themselves to buy enough time for the others.

The Architect travels to the surface to Kinloch Hold, where Duncan, Fiona, and Maric have been captured by First Enchanter Remille. It is revealed that The Architect conspired with Remille and his followers for their aid in spreading the taint through their enchantments and in return it taught Remille blight magic. In exchange, Remille gets to save certain important people in Orlais and the opportunity to present Maric as a captive to the Emperor of Orlais.

Through working with Utha, the Architect learns that the blood of a Grey Warden can disrupt the connection between the darkspawn and the Old Gods and grant them self awareness. Hoping to end the Blight by awakening all darkspawn in this way, the Architect begins using this ritual to gather a band of darkspawn followers which became the Disciples. It eventually attempted the modified joining ritual it invented on a human Broodmother, who refers to itself as the Mother.

The Mother is driven insane by the absence of the Old Gods' Calling, to which she refers to as "the song". It gathers a revolt of similar disaffected Disciples against the Architect. Eventually their conflict spreads to the surface and the Arling of Amaranthine becomes the site of their battle.

The Architect sends one of its Disciples, the Withered, to contact the Grey Wardens. However, the Withered misinterprets the Architects' order and attacked the Keep, intending to take the Warden-Commander prisoner.

The Architect confronts the Warden-Commander at Drake's Fall alongside Utha and offers the Warden its support in killing the Mother. It proposes to work together for the greater purpose of preventing future Blights.

If the Warden-Commander doesn't side with the Architect, they will have to kill it as well as Utha. Prior to the battle, the Architect mournfully apologises to Utha, remarking that it will be unable to keep its promise to her after all. After its death, the Robes of the Architect and Belt of the Architect can be looted from its corpse.

The Architect is mentioned in passing by Nathaniel Howe when Hawke is tasked with retracing the route of their expedition through the Deep Roads in order to look for Nathaniel's detachment of Wardens.

If the Warden-Commander chose to ally with the Architect in Awakening, Anders warns Hawke not to agree to help Janeka try and control Corypheus, as they are still unsure about the consequences of siding with the Architect.

Robes of the Architect

Belt of the Architect

Codex entry: A Letter from the Architect

Most curious is the nature of this Architect being. Is it truly a darkspawn, some evolution of the breed... or something far worse? I'm reminded of tales of the original Tevinter magisters who entered the Golden City and were cast back down as the very first darkspawn. Could this Architect be one of them? Could he be a ghoul, made immortal by the taint and yet unable to remember what he once was? Think of such a man, down in the Deep Roads for centuries with nothing but guilt and darkness to keep him company. He must be mad, if this is true. Even if it is not, this is not something we can allow to spread. The Chantry would lose its mind at the very possibility. 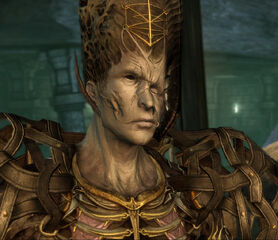 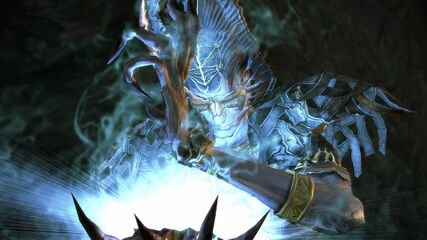 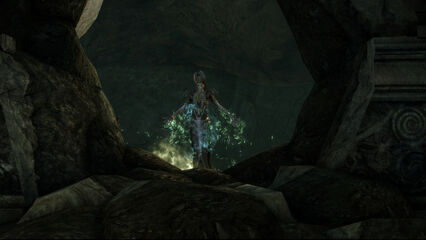 The Architect demonstrating his ability to levitate 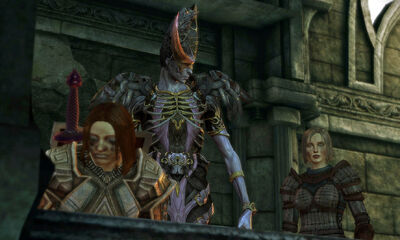 The Architect with Utha and Seranni 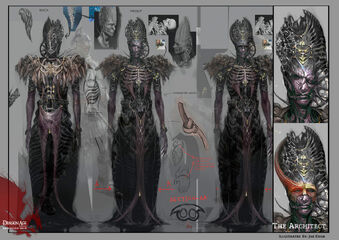 Concept art of the Architect 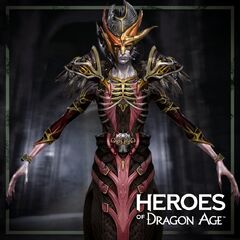 Artwork of the Architect from Heroes of Dragon Age

The Architect's tier progression in Heroes of Dragon Age

Artwork of the Architect's tier progression in Heroes of Dragon Age