Terror demons are a weaker variety of fear based demon and come in both a lesser and greater form. They are subservient to demons of fear.

We heard their screams from miles away, out in the darkness where we couldn't see anything. Once, back when I worked on my uncle's farmhold in the Bannorn, there was a calf that fell into a gulch and broke its leg. I should have run for help, but I thought I could drag it back to safety on my own. I wasn't strong enough, however, and each time I tried to pull, its leg ... the calf's screaming haunts me to this day, and that's what I heard out there. Like that calf was coming for me, come to rip off my leg ever so slowly so I knew what it felt like.

But we all heard something different, you see? One of the others said he'd run into darkspawn at Ostagar, and the scream he heard was from something called a "shriek." Another said it was a dragon roar, just like the beast that burned his family. That's when I knew what was out there was a demon. Something that wasn't just looking to make us afraid—it wanted us gibbering in terror. It wanted us running for our lives.

And we did. I couldn't rightly tell you what it even looked like. There was something in the shadows, and even though we were ready when it let out that howl, I turned and ran. I couldn't even control myself. My bowels turned into water, I dropped my sword, and I took off. It was only later when I realized I was separated from the others, and that there were more of those demons out there, hungry for more of my panicked tears.

—From a report given by Haren, soldier of the Fereldan army, 9:15 Dragon[1]

The Inquisitor can encounter terror demons most commonly near Fade rifts.

Terror Demons also possess the ability to phase in and out of the fade, allowing them to surprise their enemies by seemingly bursting forth from out of thin air.

A Terror in Heroes of Dragon Age. 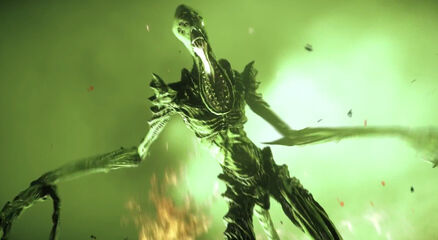 A Terror demon in the 'Fires Above' trailer 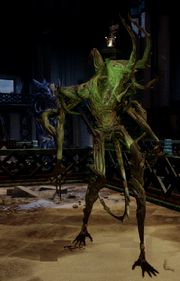 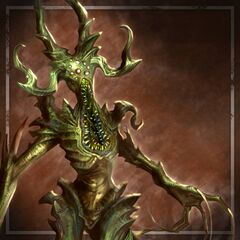 Artwork of a Greater Terror Demon in Heroes of Dragon Age

Concept Art of a Terror