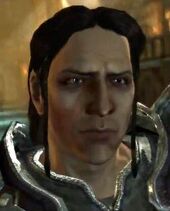 Born into a time where his country was under the boot of a foreign tyrant, Loghain Mac Tir and his close friend Prince Maric drove out the occupying forces of the Orlesian Empire. He is more a symbol than a man, representing the Fereldan ideals of hard work and independence.

Now with his friend's death, he is left to defend the land with the naive and inexperienced King Cailan Theirin, who is married to Loghain's daughter Anora.

Retrieved from "https://dragonage.fandom.com/wiki/Template:CS/4?oldid=7824"
Community content is available under CC-BY-SA unless otherwise noted.