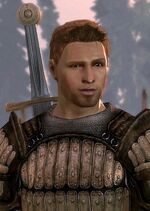 Alistair is a young Grey Warden recruited by Duncan less than six months before the Blight began. Alistair's mother died long ago in childbirth, and after being raised in Redcliffe Castle he was turned over to the Chantry for religious instruction.He began the martial training necessary to become a Templar, the Chantry's military order that watches over the Circle of Magi and hunts down dangerous apostates.

Alistair is irreverent at the best of times, and his wry sense of humor often put him at odds with his more serious-minded teachers.

Retrieved from "https://dragonage.fandom.com/wiki/Template:CS/2?oldid=6759"
Community content is available under CC-BY-SA unless otherwise noted.