Templar Armor are traditional armor of The Templar Order, worn by all guardians of the Chantry.

This Templar armor is mostly used in Ferelden. The armor completely covers the body ​​with metal plates and includes a cylindrical plate helmet and a purple skirt. A chain mail under-layer provides additional protection and runs to the wearer's ankles. The plate can be obtained at the circle tower when you encounter a few enchanted templars and a desire demon it is picked up from the main templar shown in the cutscene before the fight.

This armor is warn by initiates and other low ranking Templars in the Free Marches. It is much lighter than the Ferelden variant and is mostly leather except for a plate helmet and chestguard.

The armor of the ranked Templar in Free Marches. It's a leather armor mostly covered with plate, with a plate winged helmet and a black and red skirt. A version of this can be obtained by siding with the Knight Commander Meredith at the beginning of Act 3 (without the boots and gauntlets). Also the armor is redsteel and not the normal aurum.

It's the Templar Armor of the Knight Commander of the Free Marches. The armor consists of a chest plate, black leather legs and boots, a red hood and a black and red skirt. The Templar insignia of the burning Blade of Mercy normally found on the breastplate is instead on the chain-mail above the waist below the breastplate proper. This armor is unavailable to the player. 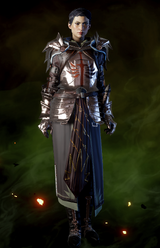 A set of armour intended for officer Templars. Of note is that the Blade of Mercy icon is red instead of the standard black.

An alternate Templar Armour set, where the chest plate bears the image of a lion, the symbol of Orlais, possibly suggesting a connection to the Orlesian Empire.

Armor of the Knights-Divine Edit 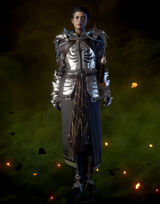 This armour set is intended for use by the Knights-Divine, the bodyguards of the Divine herself.

Armor of the Divine Will Edit

An armor granted by the Chantry to no lower than a knight-vigilant. It only consists of one silverite plate armor with the same design of the Chevalier's Armor in silverite of Orlais.

A Medium Armor bought from the Shady Merchandise Mechant in the Docks. Not worn by any Templars in game, it is possible it is only issued to men operating undercover as it shares the model of the Flint Company Cuirass and Generic Slavers.

Retrieved from "https://dragonage.fandom.com/wiki/Templar_Armor?oldid=805264"
Community content is available under CC-BY-SA unless otherwise noted.