Edit
watch 03:19
Wiki Targeted (Games)
Do you like this video?
Play Sound

For the military organisation, see Templar Order.
For the specialization in other games, see Templar (Origins) and Templar (Inquisition).

+10% damage vs. spellcasters and Fade creatures

The strong arm of the Chantry, templars serve as guardians of the Circles of Magi, hunters of apostates and maleficarum, and rarely, as a standing army at the command of the Divine. Through ingestion of carefully prepared lyrium, templars gain resistance to magic, including the ability to interrupt spells. Though the Chantry controls the lyrium trade, those with the right connections can acquire enough to emulate the abilities of these vigilant warriors.

Templar is one of the specializations available to the warrior class in Dragon Age II. The templar specialist's talents are focused on anti-magic combat.

It takes incredible focus to wield magic, but even greater will to withstand it. The Templar specialization originated in the Chantry with the establishment of the order, and their mandate remains the restriction and containment of mages.

But the abilities Templars command are not divine; they are the product of intense training and rigorous devotions. These are achievable by any warrior, although the discipline required may seem just as much a calling.

Templars don't just endure magic, they deny it, and deny others the use of it. At the height of ability, a Templar simply shrugs off most harmful effects, and can completely suppress a mage's ability to cast.

They are warriors of singular focus, and none can match their dedication or effectiveness at taming those who would abuse the magical energies of the Fade. [1] 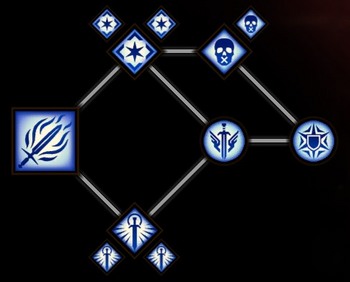