Teagan was born, most likely in Redcliffe, in 8:91 Blessed (possibly late 8:90)[2]. When Teagan was two his parents decided that Ferelden was too unsafe for him and Eamon, and that they would travel to Ansburg with their mother Marina to join her sister. The brothers traveled to Denerim with their mother and boarded a ship headed for Wycome. During the journey across the Waking Sea, Marina became critically ill. After reaching Wycome, the trio boarded a carriage headed for Ansburg, where Marina died shortly afterwards. After Marina's death, Teagan and Eamon were raised by their aunt, Thalia Aurum, and her husband who treated them like they were their own.

As the Fereldan ambassador in Orlais, he attends a ball in the royal palace at Val Royeaux, where Grand Duke Gaspard taunts him with the lost sword of Moira Theirin, claiming that it was taken off her corpse and is now used to kill rats. The Duke intends to provoke a deadly duel that would sour relations between Orlais and Ferelden but Empress Celene and her champion Michel de Chevin cleverly defuse the situation and satisfy Teagan's honor by having him duel Michel with feathers, the symbol of the Chevalier.[3] Teagan sends Celene a letter voicing his gratitude and returns quickly to Ferelden to avoid any further trouble.

Two years after the Elder One's defeat, both Orlais and Ferelden have grown wary of the Inquisition's unchecked power and call the Inquisitor forth to answer for their actions. Teagan is sent to represent Ferelden, which as a nation favors the complete dismantling of the Inquisition, due to concerns of the Inquisitions' large military presence, namely Skyhold, being so close to Ferelden's borders.

Following the resolution of the Qunari crisis, as the Inquisitor returned to the Exalted Council, Teagan admitted while everyone acknowledges the Inquisitor's deeds, he reminded that Corypheus was no longer a threat. Ultimately, the Inquisitor made the choice to either disband or reform the Inquisition. 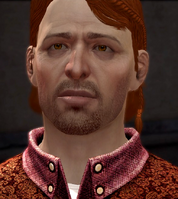