watch 02:39
The Loop (Games)
Do you like this video?
“The Bannorn will not bow to you simply because you demand it!”

Teagan Guerrin (born 8:91 Blessed) is the Bann of Rainesfere, and later Arl of Redcliffe. He is the brother of Arl Eamon Guerrin and Rowan, the deceased queen of Ferelden. This makes him uncle to King Cailan Theirin.

Teagan was born, most likely in Redcliffe, in 8:91 Blessed[2]. When Teagan was two, his parents decided to send him and Eamon away from Ferelden so that his father could publicly announce his support for the Rebel Queen without further endangering them. Arlessa Marina took them to her elder sister Thalia Aurum, at the time the ruling Margravine of Ansburg. The brothers traveled to Denerim with their mother and boarded a ship headed for Wycome. Marina fell gravely ill during the journey across the Waking Sea. From Wycome they took a carriage to Ansburg but it was already too late for the Arlessa, who died just a day after reaching the family home. After their mother's death, Teagan and Eamon were raised by their aunt and uncle, who treated them as if they were their own children. Teagan grew especially close to his cousin Cador, and the pair quickly became known as "Trouble" to the keep's inhabitants. When Arl Rendorn was killed at the battle of West Hill in 8:99 Blessed, Thalia and her husband legally adopted Eamon and Teagan.

Eamon returned to Redcliffe in 9:02 Dragon to assume the title of Arl while Teagan remained in Ansburg. His great ambition in life was to participate in the Grand Tourney. He was already an excellent horseman, and his combat instructors believed he had the potential to one day represent Ansburg in the Grand Tourney. On his eighteenth birthday, just a few weeks before participating in a Starkhaven tournament with his cousins Percival and Cador, Eamon sent him a letter asking him to return and rule the bannorn of Rainesfere. Teagan was initially set to refuse, but Thalia convinced him to travel to Ferelden to at least tell his brother in person. He met Eamon and his new wife in Denerim and they made the trip to Redcliffe together. By the time they'd reached Lake Calenhad, Teagan had agreed to become Rainesfere's bann. Despite his new responsibilities, Bann Teagan returned to Ansburg every year to visit his family.[3]

Immediately after the battle at Ostagar Teagan is shown standing against Loghain Mac Tir at the Landsmeet, highly suspicious of Loghain's withdrawal from the Battle of Ostagar. It seems he is the original instigator of the Bannorn's resistance against Loghain's regency, and he brushes off Queen Anora's reassurances that her father is "doing what is best for Ferelden" by pointedly asking her if Loghain also did what was best for her husband — Teagan's nephew.

If the Warden sacrifices themselves to kill the Archdemon, Teagan will be present at the funeral.

Teagan can be encountered by Hawke in three different scenarios during the course of Dragon Age II, depending on the choices made in Dragon Age: Origins:

The plot follows BioWare's own canon, meaning it may not follow some of the player's choices in the games.
As the Fereldan ambassador in Orlais, he attends a ball in the royal palace at Val Royeaux, where Grand Duke Gaspard taunts him with the lost sword of Moira Theirin, claiming that it was taken off her corpse and is now used to kill rats. The Duke intends to provoke a deadly duel that would sour relations between Orlais and Ferelden but Empress Celene and her champion Michel de Chevin cleverly defuse the situation and satisfy Teagan's honor by having him duel Michel with feathers, the symbol of the Chevalier.[4] Teagan sends Celene a letter voicing his gratitude and returns quickly to Ferelden to avoid any further trouble.

After the Fifth Blight, Arl Eamon Guerrin elected to remain in Denerim and made Teagan the new Arl of Redcliffe. While both Eamon and Teagan were popular with their subjects, Eamon's only child, Connor, was either killed in 9:30 Dragon or forbidden by Chantry law from inheriting his father's title for being a mage. Knowing that Teagan would do well in the role, Eamon abdicated in favor of his younger brother.

In 9:41, the rebel mages under Grand Enchanter Fiona were allowed to take refuge in Redcliffe by Ferelden's monarch. When the mages allied with the Venatori, Magister Gereon Alexius evicted Arl Teagan and his soldiers from Redcliffe Castle and took control of the town. Teagan retreated to Denerim to seek aid in reclaiming Redcliffe.

If the Inquisitor recruits the mages:
Shortly after the Inquisition defeats Alexius and the Venatori, Ferelden's monarch arrives in Redcliffe. Angered at the mages' behavior, they rescind their offer of shelter, forcing the rebel mages out of Ferelden. With no other choice, they are forced to join the Inquisition, as either free allies or conscripts.

Arl Teagan later demands that the Inquisition provide reparations for Redcliffe. If the Inquisitor does so, Teagan then apologizes for the unpleasantness and extends an invitation to participate in the tournament to win the bannorn of Calon.

Arl Teagan eventually returns and resumes his duties. Even as Arl of Redcliffe, he spends more time in the Free Marches than he does in Denerim, and in Grand Tourney years, the people of Redcliffe complain that they see him so little they might as well be governed by a portrait on the wall.[5]

Two years after the Elder One's defeat, both Orlais and Ferelden have grown wary of the Inquisition's unchecked power and call the Inquisitor forth to answer for their actions. Teagan is sent to represent Ferelden, which as a nation favors the complete dismantling of the Inquisition, due to concerns of the Inquisitions' large military presence, namely Skyhold, being within Ferelden's borders.

Following the resolution of the Qunari crisis, as the Inquisitor returns to the Exalted Council, Teagan admits that while everyone acknowledges the Inquisitor's deeds, Corypheus is no longer a threat. Ultimately, the Inquisitor makes the choice to either disband or reform the Inquisition.

A Village Under Siege

Massacre in the Market

The Arl of Redcliffe (war table) 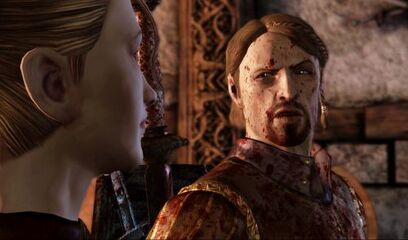 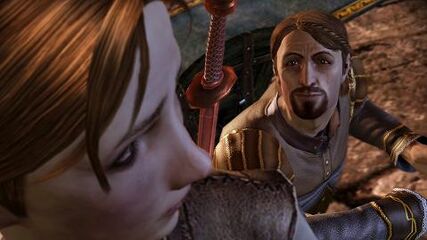 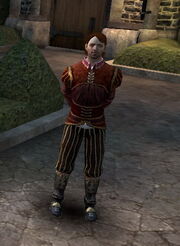 Artwork of Teagan from Heroes of Dragon Age

Retrieved from "https://dragonage.fandom.com/wiki/Teagan_Guerrin?oldid=890102"
Community content is available under CC-BY-SA unless otherwise noted.