Tapster's Tavern is a popular tavern in the Orzammar Commons which serves dwarven liquor as well as food.

The tavern does not serve casteless. Furthermore, it is also known that it shares some ties with the Carta when it was under leadership of Beraht, since the owner of the tavern seen in the Dwarf Commoner Origin allows the Dwarf Commoner to find one of Tapster's current customers and kill him.

A Lord's Trust: The First Task

A Prince's Favor: The First Task

A Tale of Orzammar[edit | edit source]

An Expedition to the Deep

Unlike other taverns and inns in Ferelden, the Warden can't trade in Tapster's. However, there are several characters here that they can talk to. The Warden can talk to Corra.

The Warden can also listen to a dwarven drinking song here:

"Ooohh, I've heard of dwarves who get in fights 'bout every time they drink,
And those who need to have a woman just to help them think,
And if you want to see a dwarf whine and beg and plead,
Just pour out all his ale and take away his mead!

There's never been a Paragon of Wisdom or of Thinking,
And though I tried a time or two, I ne'r got raised for stinking,
But hang around here long enough and don't you go a blinking,
'Cuz someday I am gonna be the Paragon of Drinking!"

Note: To hear the translation the subtitles need to be turned on as it is sung in dwarven 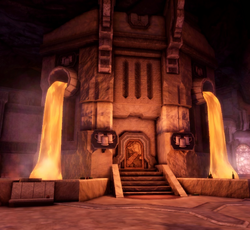 Tapster's Tavern as seen from the Commons 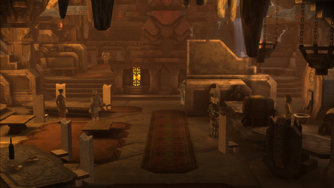 The tavern as seen in A Tale of Orzammar DLC

The distress of Nervous Adventurer
Add a photo to this gallery
Retrieved from "https://dragonage.fandom.com/wiki/Tapster%27s_Tavern?oldid=880165"
Community content is available under CC-BY-SA unless otherwise noted.