Tamar is a former member of the Disciples of Andraste cult currently working for the Inquisition. She is a player-controlled protagonist in Dragon Age: Inquisition's multiplayer.

Tamar is a fearsome warrior who developed her abilities by consuming dragon blood. One of the Disciples of Andraste living in Haven, she fled into the mountains after the Temple of Sacred Ashes was discovered by the Hero of Ferelden and the Chantry sent soldiers to reclaim it. She spent years in the mountains fighting against members of the Chantry until she was finally captured and imprisoned in the cellars of Haven's chantry.[1]

After the Divine Conclave was destroyed and the Inquisition reformed, Commander Cullen offered her a choice: serve the Inquisition or die in prison. Tamar accepted the offer, eager to return to the heat of battle. She has refused to give up her beliefs, though she is now loyal to the Inquisition.

Tamar is involved in various war table operations. She can also sometimes be seen on the battlements at Skyhold with two other agents, near where Cullen is stationed. She can't be spoken to however.

She is also available as a selectable playable character in Dragon Age: Inquisition multiplayer. 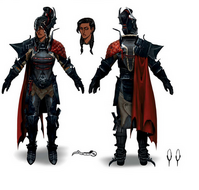 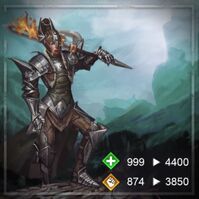 Retrieved from "https://dragonage.fandom.com/wiki/Tamar?oldid=808461"
Community content is available under CC-BY-SA unless otherwise noted.