Edit
watch 02:19
Wiki Targeted (Games)
Do you like this video?
Play Sound
“Before them I was nothing. I was a slave. My parents sold me into it. The Qunari gave me refuge, a purpose, and a name: Tallis.”

Dragon Age II:
Mark of the Assassin
Introducing Tallis
Baiting a Wyvern
The Cult of the Sky
The Du Lac Sign
Heart of the Many
A Map of Sorts
A Romantic's Gift
The Lost Hounds
Inquisition:
Track Spies in Vyrantium

Tallis is an elven Qunari assassin who is the protagonist of Dragon Age: Redemption and is also a temporary companion in the Mark of the Assassin DLC for Dragon Age II.

Tallis was born in Tevinter, where slavery is legal. In Minrathous, she was sold into slavery by her parents so they could pay off their debts. She was on a slaver ship bound for the city of Carastes when the Qunari boarded and captured the ship. Everyone aboard was brought to the island fortress of Qunathras, to the east of Seheron. Tallis was initially deemed an unsuitable convert, and would have been rendered a mindless laborer if not for the intervention of Salit, a high-ranking Ben-Hassrath agent, who formally requested that the tammasrans turn the girl over to him so he could train her to become a Tallis, "those who solve". Her duties involved travelling to non-Qunari lands, primarily Orlais and Nevarra, where she was tasked with burglaries, heists, and assassinations. She always completed those missions successfully, though never to the complete specifications of her superiors. They would have preferred the mission be abandoned rather than completed imperfectly.

Tallis finally pushed her superiors over the edge during a mission to retrieve a Qunari artifact in the possession of Count Alphonse Valmont in Arlesans. During the heist, Tallis found human and elven children being kept as sex slaves and set them free, killing the Count and several of his guards in the process. This caused a diplomatic incident that almost led to a war between the Qunari and Orlais. Tallis had failed to steal the Qunari artifact without leaving any trace as she had been ordered, and she was therefore demoted to the rank of "Athlok" - a laborer. She was assigned as a kitchen-hand on a boat docked in Kirkwall, during the Arishok's stay in Kirkwall. She was offered a chance to redeem herself two years later.[1]

When she is first seen she is working as an Athlok in a ship moored in the docks of Kirkwall. A Qunari informs her that she has been reinstated as Tallis, and must track down a Tal-Vashoth Saarebas who escaped a Chantry prison. She harries an accomplice of the fugitive mage and encounters a Templar named Cairn. The two battle briefly before Tallis finally extracts the needed information from her captive mage, killing him shortly afterwards.

She attempts to intercept her target at a Dalish camp, only to discover that they have been decimated by the Saarebas. She discovers that the Saarebas and his accomplices stole a precious and dangerous elven artifact: Mask of Fen'Harel. Setting out again, she joins forces with Cairn the templar, who is also tracking the Qunari magi; they are joined by the First to the Keeper of the ravaged clan, Josmael.

Tallis locates the Saarebas in a cave, where he uses the blood of Josmael's love to complete part of the Mask of Fen'Harel. Saarebas then escapes and seals the group in the cave, alongside one of his cohorts: a reaver mercenary named Nyree.

Tallis hires Nyree using money she stole from Josmael's clan. The mercenary reveals that the mage is heading to Sundermount, and Josmael offers to show the party a shortcut through the mountains. On their way to the elven ruins, the group rests at an inn. There, they are confronted by a group of thugs hired by the rogue Saarebas.

After defeating the mercenaries, Tallis and Cairn accuse Josmael of leading the group into a trap, after which the templar attempts to kill the elven mage. Nyree rescues Josmael and reveals that Cairn is responsible for the Saarebas' escape in the first place. Tallis demands answers, and Cairn admits to trying to kill the mage for killing his family and destroying their village. Cairn's confession brings the two closer together. They no longer bear any ill will toward Josmael.

They manage to get to Sundermount and decide to wait for the Saarebas. Whilst they wait, Tallis has a conversation with Cairn about their purposes for hunting the mage. He insists that the Saarebas needs to die, and encourages Tallis to abandon the Qun and become a renegade within the Qunari society as he has become one within the Chantry. She then states that doing so would make her a Tal-Vashoth, but Cairn makes her realise that she may in fact already be one. Tallis is reluctant to think about the idea, but does not resist when Cairn kisses her.

After the Saarebas arrives, Fina, the elven prisoner of the mage, betrays Josmael by alerting the Saarebas of the group's presence. While the group battles, Josmael accidently stabs Fina, completing the ritual and tearing open the Veil. Before the power of The Fade can be completely unleashed however, Tallis shatters the Mask of Fen'Harel, sealing the Veil shut.

In his rage, the Saarebas unleashed a lightning bolt at the elven assassin, but Cairn saves her life by throwing himself in the bolt's path. Tallis collars the mage, and it makes the Qunari powerless. Tallis then spots Cairn's body. The elf decides to honour Cairn's wish and defies her orders and role in the Qun by killing the Saarebas to avenge Cairn.

The following day, she buries the dead along with Josmael and Nyree, before saying her farewells. Josmael gives her a broken phylactery that belonged to Cairn, as a keepsake. When Nyree inquires about how the Qunari will react when they discover the Saarebas was killed, Tallis hints that she might defect and become a Tal-Vashoth. Eventually however she returns to the Qun and regains her rank of Tallis.

Tallis first encounters Hawke in Kirkwall at the Hightown market. Hawke is lured into an ambush set up by the Antivan Crows which Hawke narrowly survives with Tallis' assistance. Tallis manages to enlist Hawke's aid in stealing a jewel called the "Heart of the Many" from an Orlesian Duke named Prosper de Montfort, who she claims has no right to possess the jewel.

After arriving at the Duke's Marcher residence, Chateau Haine, Tallis aids Hawke in the Duke's Wyvern hunt, successfully baiting and slaying one of the ferocious beasts. Upon finally breaching the Chateau's Vault, Duke Prosper and his Chevaliers capture Hawke and Tallis and reveal to Hawke that Tallis is a Qunari agent.

While locked in The Dungeons, Tallis confesses the truth to Hawke. She was actually trying to stop a Tal-Vashoth named Salit, who first recruited her into the Ben-Hassrath, from selling Qunari secrets to Orlais. Though the Ariqun did not feel it worth intervening, Tallis decided to stop Salit of her own volition, knowing that Salit's betrayal will harm many people, not just Qunari.

Contrary to popular belief, Tallis claims that not all Qunari are zealots. In her opinion, the only reason Qunari react violently is because most of them don't understand why non-Qunari behave the way they do. Tallis, who understands both cultures, believes that it is her duty to protect the innocents — regardless of their culture. Although she doesn't deny that dangerous people do need to be assassinated for the good of all, she asserts that violence isn't their solution for everyone.

Tallis herself believes that the Qun inspires purpose, community, and the unified effort of improving everyone's lot. Although some see the Qun as tyranny, to her it represents the promotion of the welfare for all. Tallis believes these principles are worth defending, upholding, and striving for. Stopping Salit is not only a moral obligation but also a test of faith to determine the righteousness of her beliefs. Although Tallis admits that the Qunari's system isn't perfect, she deems it a valid alternative if not better than the indifference and cruelty promoted by outside cultures.

Whether Hawke decides to help Tallis or not, after escaping, Hawke eventually confronts both Prosper and Salit. While Hawke distracts Prosper, Tallis steals the scroll Salit was handing over to Prosper, which contains information on various Qunari sleeper agents throughout Thedas, even those who have left the Qun, the duke having not had a chance to be appraised of its true significance. Prosper and his troops kill Salit and his Tal-Vashoth but are slain after a grueling battle by Hawke and their companions. Tallis takes a moment to mourn her former mentor and reveals to Hawke that if the scroll fell into human hands, these agents and everyone they know would be persecuted and killed. Though the Ariqun believed they knew the risks, Tallis feared for the agents' families and friends. Tallis then passes Hawke an actual jewel called the Heart of the Many before departing from the Champion's company. It is likely that Tallis returned the scroll to the Qunari, as her name has surfaced in a number of reports of Ben-Hassrath activity along the northern coast, including in Minrathous.

Hawke mentions in their journal that they believe they spotted Tallis in a crowd a year later disguised as a servant but could not confirm it was her.

If the Inqusitor sides with the Qunari in Demands of the Qun, a Tallis contacts the Inquisition regarding some suspicious activity in Ferelden, initiating a chain of war table operations that culminates in exposing a Venatori attack on Denerim. Given that Tallis is a title, and not one confirmed to be unique or held by a single follower of the Qun at any given time, it is not clear whether this is the same Tallis who recruited Hawke.

The Inquisitor can find a letter of correspondence between Tallis and Saarath. Saarath gives Tallis advice on how to find peace in the Qun even though Saarath heavily revises the letter as time goes by.[2]

A Map of Sorts

There are no upgrades for Tallis's armor, Where the Heart Lies, in the DLC. 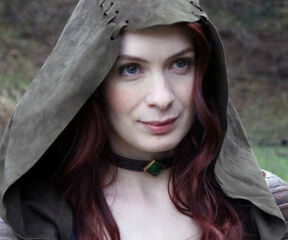 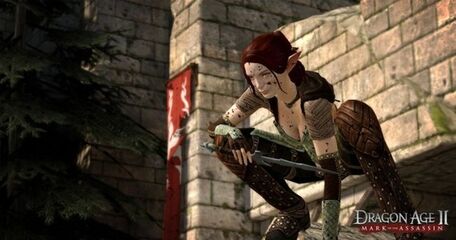 Tallis in Mark of the Assassin 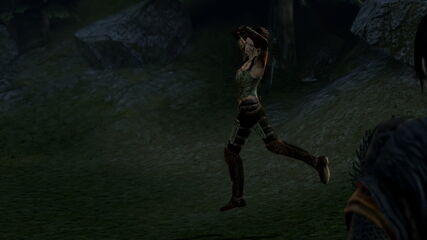 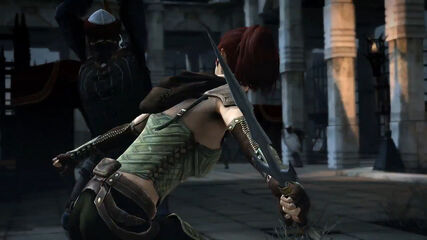 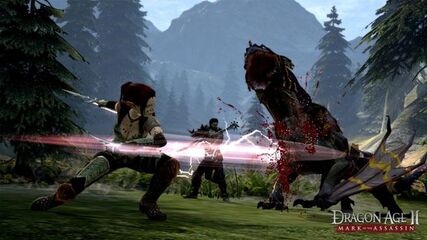 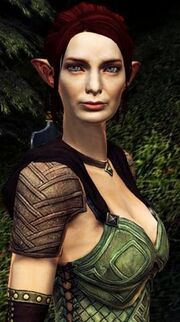 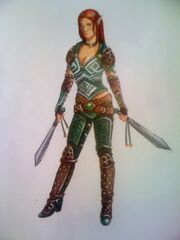 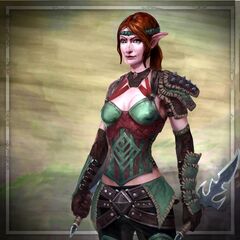 Artwork of Tallis in Heroes of Dragon Age

Artwork of Tallis' tier progression in Heroes of Dragon Age