Back to page
Edit source

I mean come on, he's the coolest thing since sliced bread. AND has quite a lot of charm.

I'm going to completely spoil the end of the game for you now, since you asked this. SPOILER ALERT. By the time the game ends, Hawke has disappeared and all his companions have been separated from him, except the character he romanced, who has disappeared with him. If Varric was romanceable, then Cassandra might not have been able to find him. --Davilimap (talk) 13:02, March 11, 2011 (UTC)

I was thinking the same thing, but then realized what Davil said. (Guest)

"There's power in stories, though. That's all history is: the best tales. The ones that last. Might as well be mine." I think this quote tells us more about Varric then the one currently up on the page. Is there a protocol for changing the chara quote, or can we just flip it out? --Lia Cousland (talk) 06:28, March 19, 2011 (UTC)

■Varric and Sebastian are the only party members whose armor will never change throughout the story (the others change if romanced and Aveline whose changes in Act II and III).

I believe this is incorrect, Fenris and Isabela also dont change Outfits during the Game (no matter if romanced or not)

Wondering who voiced him. His voice eerily reminds me of Lucien Lachance... Which leaves an odd feeling when the flirty or smooth dialogue comes up... Also, anybody else giggle like a giddy schoolgirl whenever they run around as Varric?... Just me? --Geotexan (talk) 22:12, March 22, 2011 (UTC)

I need comfirmation; during act 3 i made his personal quest after Find Nathaniel, i think ( not sure ) that the upgraded Vianca cause this, all his armor slots gone, please comfirm.

Has anyone else noticed that Varric draws a large amount of aggro? I can't quite track down what causes him to be a good distraction. I know its got a lot to do with his ranged damage output (depending on build and runes), but there is another factor involved also, maybe his companion armor but I am not entirely convinced that's it. Mictlantecuhtli (talk) 10:55, May 28, 2011 (UTC)

IMO there shouldn't be so few quests that would affect Varric's Friendship and Rivalry. Care to share everybody?

I've found this: Act 3, "Alone" quest, choosing to hand Fenris over to Danarius gets (+10) Rivalry from Varric. Also, the first quest listed under Varric's Friendship section shouldn't be "Bait and Switch" but the one in which Varric asks Hawke to talk to him in the Hanged Man, not sure what name it was called. --Zephyrius (talk) 10:47, June 30, 2011 (UTC)Zephyrius

Added comment from stating David Gaider: “Actually… we almost did slip something in there. We mentioned having the interrogation end with Varric meeting back up with Hawke and explaining that he’d told them everything. ‘Everything?’ ‘Don’t worry. I skipped the part about us…’ “ If you find proof that this is incorrect, please correct and link source. Xelestial (talk) 00:35, August 13, 2011 (UTC)

I've removed this text from the article: "If Hawke sides with the mages, Varric offers that he doesn't like helping dangerous people run amok. It is obvious he only joins Hawke's fight due to supporting Hawke and that he would have preferred to remain neutral."

Varric will react the same regardless of which side you choose, so I've replaced the above with: "During The Last Straw, Varric will side with Hawke regardless of whether the player supports the mages or the templars." CaptainFlan (talk) 03:16, January 26, 2012 (UTC)

I noticed a vary large absence of any information on Varric in the Legacy storyline. One thing that is added, for example, is that Bianca was an idea crated by a draw you encounter in a battle. She was apparently the idea for a repeating crow bow, but was the only one that worked. I know that some parts are mentioned in the rivalry/rewards or whatever it's called, but what about the rest of the story? It is the fate of a Nobody (talk) 21:25, February 27, 2012 (UTC)\

Varric Was Waiting For Hawke

In The Dungeons, Varric and Hawke had a party banter that revealed he was actually waiting for him to arrive hoping to intercept him before he talked to Bartrand. Worth noting?

After beating The Golems of Amgarrak again, I realised that the voice actour for Varric, Brian Bloom, also did the voice-over work for Jerrik. Is this worth noting in the trivia section?

We typically do not add voice actor trivia (per DA:TRIVIA). ···

I thought as much, but was unsure. Odd then, that Mass Effect Wiki, with all its rules and regulations, allow voice actour trivia aplenty. Thanks for the swift reply!

According to the trivia section it says that Varric can be flirted with by both a female and male Hawke. I played both genders, and found the flirt option while playing as a female Hawke, but when I played as a male Hawke I never found the flirt option. (I believe it was the same exact conversation. (It was a few months ago since I last played.)) If there was a flirt option I definitely would of found it and used it. (I know he's not romanceable, but I'm curious as to whether this is true.) --107.193.141.230 (talk) 03:56, November 21, 2013 (UTC)

As I had encountered the same thing in my walkthrough, I'll tweak the trivia accordingly.

In order to reduce over-cluttering of the image gallery (since guidelines say only approx 12 images per gallery), I've removed those images from the gallery and just added links to the character kit announcement and the guide which has all of the images on it. If this is an issue please discuss it rather than undoing the edits. Kelcat (talk) 00:46, February 23, 2014 (UTC)

I am not sure about this change. Varric is a companion in both games, but as of yet we don't know if his role is bigger than it was in DA2. According to the guidelines, we shold keep a picture from the game they are featured the most, and for now that game is DA2. Henio0 (talk) 15:25, April 22, 2014 (UTC)

Varric's status as a companion in both games means that he has an equally important role in each. Though it's true we can't know precisely how much screen time he'll be afforded in Inquisition, it seems reasonable to say that his role will be equivalent to the one he had in DA II, thus the most recent image should be used.

But the game’s not even out yet. Character infobox image guidelines say to "use the picture that would best represent them." Seeing as how Dragon Age II has been out for over 2 years, an image from that game would seem to me to represent him better than a handful of screenshots and videos from a game that hasn’t yet been released. --Kelcat (talk) 23:59, April 22, 2014 (UTC)

Agreed, his importance as part of the frame narrative would seem to give his DA2 appearanace an edge up. We can just put a prominent image of his DA:I appearance under the relevant section.-

In the trivia it states that Varric can be flirted with by a female Hawke and the Inquisitor. Is this referring to a male and female Inquisitor or just a female one? If it is only female, should that be added in the trivia for clarification?--Vandiir (talk) 02:52, January 16, 2015 (UTC)

If Varric can be flirted with in Inquisition, it can't be done by a human or elven Inquisitor. I've played as male and female and gone through all conversations with him--I've never had a "heart" option show up on the dialogue wheel. Possibly a dwarf-only Inquisitor? --♫ Kelcat Talk 03:00, January 16, 2015 (UTC)

Which picture should be used in the character infobox? 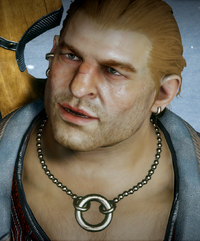 (The previous one. More accurate, being an in-game image.)
2. 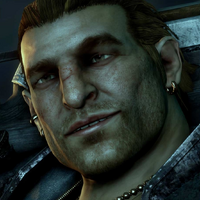 (The new one. Higher quality and more space effective.)

I'm neutral because although they are somewhat different, both are fine in my eyes. --

The first one's better because it's from the actual game. It's also high quality and well-lit. Space effective isn't really an issue, the first one isn't that large. I don't see a reason to change it. --♫ Kelcat Talk 21:39, February 16, 2015 (UTC)

Is there a particular trigger for it? In my game, it occurred upon completion of Here Lies the Abyss, so I kind of assumed it was triggered by the conclusion of Hawke's storyline. What happens if you complete the Winter Palace first, however? --Koveras Alvane (talk) 09:21, January 31, 2016 (UTC)

There has been an endless edit war for about a long as this page has existed about what Varric's nickname for Fenris is: "Elf" or "Broody". I have no idea what the correct answer is (it's been too long since I've replayed DA2), but I propose to settle this debate here on the talk page, preferably with citations and screenshots, and add a specific citation to that paragraph so that future editors can confirm it for themselves. --Koveras Alvane (talk) 08:58, August 23, 2017 (UTC)

I think the proper nickname is "Elf." In banter between Varric and Fenris, Varric calls him "elf" 7 times:

The only time Varric ever calls Fenris "broody" in banter is when he calls him "The broody elf." There's another mention of brooding ("Is brooding a sport in Tevinter?") but no other instance of Varric calling Fenris "Broody." It's been a while since I played DA2 so there might be more in the game, but at least from the banter, it seems pretty clear that what Varric calls Fenris is indeed "elf." Evamitchelle (talk) 10:00, August 23, 2017 (UTC)

I've searched all TLK files of the game. There's another mention of the term, "Oh-ho! The broody elf tells a joke!" and one or two more instances, where I can't get the proper context.
Not one single time is "broody" capitalized or used as a single nickname. It always comes together with "elf" or is simply an adjective within a sentence.

This is the game file for Varric, do with it what you will - it suggests that rather than being "brought to the Temple of Sacred Ashes by Cassandra to provide Divine Justinia V with information on Hawke.", Varric's motivation was to be that he was an "expert" in Red Lyrium. ... but then it also says his age range is 23, so... take it all with a pinch of salt ... or... not. I found Alistair and his Age Range says 1F, which is ... 31 in hex. So if it's 23 in hex it's 35, which is far more believable for Varric.

I think that this content has the same level of canonicity as other "dummied-out" content: interesting to know, but cannot override what actually can be found in the released game itself. And the released game supports the other version of events with Varric's codex entry and Cassandra's banter with him ("I questioned you, and then brought you to Haven so you could tell your story to the Divine.")... --Koveras Alvane (talk) 08:13, March 16, 2018 (UTC)