Directly from the game files: da3/designcontent/characters/global/specialist/josephine "The Ambassador to the Inquisition, Josephine Montilyet is a potential love interest in her late 20s. Prim, orderly, and educated, her manner is proper and professional. Josephine strongly wants to convey a sense of dignity befitting her position as an Antivan noblewoman and a diplomat." Accent: Italian

This is a discussion to see if anyone agrees with Alexsau1991 changing the main image. Personally I think it is unnecessary. A) The original was fine and B) The new one is a little blury and a side profile. As Loleil once said to me "if it ain't broke don't fix it". Here are the two images for reference: --Xsari (Talk) 00:25, October 14, 2014 (GMT) 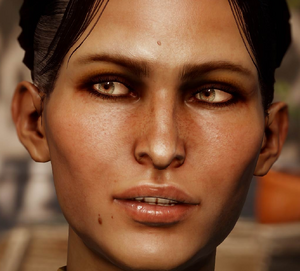 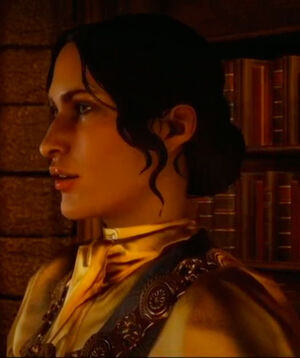 While I see the issue with the quality, the previous one is waaay too close up in my opinion. I think if someone could take a better screenshot from the stream (granted it's up somewhere), like from the front. That would be the best, even with the blur. The game is out soon and I'm sure the picture can be upgraded with a high resolution one from the game pretty quickly. I'd favor a picture from the stream because it shows the in-game appearance of hers, while the promotional pictures may not be as accurate (since we don't know if she's ever gonna have that kind of hairstyle and things like that). Also I saw it mentioned here that usually the images show the characters when the player first meets them. I should probably dig up the actual guideline, although the one who said it is very well-adversed with guidelines in general. But anyway, judging by the context of the stream, this image would perfectly fit that bill. So to conclude it, I think another screenshot would be better, but I'd stick with the new one. --

Xsari, it really does depend on your classification of 'broke'. Re:A, I did not consider the first image "fine", it's too close - thus in my view 'broke'. Re:B, I'll give you that the quality of the image I uploaded is inferior, but this is more than countered by the closeness of the previous profile. Although I would favour an image that's face on, this is superior to the previous image. (although, the irony of using 'side on' as an argument why not is that a profile picture is side on, by definition.) Alexsau1991 (talk page) 15:02, October 14, 2014 (UTC)

Oh, and an additional reason for the change in image - that should (in theory) trump anything said thus, is Josephine's hairstyle has changed since the first image was released. Alexsau1991 (talk page) 15:04, October 14, 2014 (UTC)

Despite the relatively minor differences in Josephine's hairstyle between the two images, my preference is definitely for the older one. I don't have a problem with using images before the game is officially released, but our guidelines clearly state that the images should have "high resolution" and be of "good quality".

In regard to the argument about the closeness of her face, I really don't think the inch of her neckline shown in the newer images is all that important, nor do I think it'd be sensible to sacrifice image quality for distance. Our guidelines also state that character images should ideally have a "tight focus" on a character's face.

I'd be perfectly happy to change the image if one of comparable quality with the older picture is uploaded or when the game is released, for now I think we should stick the highest quality one which best fits our guidelines.

After going to Val Royeax to help solve Josie's family trade problems, I had a conversation with her in Skyhold. It started when the camera focused more on the back of the chair than on her face, as she apologized profusely. By the time Lelianna joined the conversation, her head was about the height of the chair arms. When we had decided to entertain Lelianna's idea, Josie was arguing from under her chair. It was almost like she was sinking in shame. She reset herself into a proper sitting position once Lelianna left; but the damage was done, it had turned a serious conversation into a good giggle. Shadizar666 (Ruck Rules) 16:42, November 26, 2014 (UTC)

Is there a list of diplomatic conversations with Josie? I just had a chat, and gained influence. How many chats have I had with her and not noticed influence? Anyway, it was about whether or not Andrasta said anything to her in the fade; I told her to say nothing, let the rumors fly, and got 80 influence for it. Does this influence change with the answer given? Shadizar666 (Ruck Rules) 04:35, March 24, 2016 (UTC)