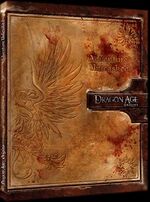 If we're going to adopt viktoria's "slash and burn" solution we also run into greater issues: Take the Gell Lendon article for instance, that is a tabletop character but Gell Lendon is mentioned as the arl of edgehall (another tabletop location) in two of the comic series. His mere existence directly recalls one of the pre-designed tabletop adventures. Now, do we strike these off as viktoria says, or do we keep them? And of course, that's just the start of the quagmire if we take the maximalist interpretation some here to seem be arguing for.

Retrieved from "https://dragonage.fandom.com/wiki/Talk:Dragon_Age_(tabletop_RPG)?oldid=857733"
Community content is available under CC-BY-SA unless otherwise noted.