I shall see what I can do!

I think the comic chronologically takes place between Inquisition and Trespasser, since Aaron and Vaea arrive in Kirkwall bringing Alistair's congratulations to Varric for becoming Viscount, and Varric says he will be officially crowned the next day, but in Trespasser, he is already firmly on the throne. Also, in Codex entry: Varric and the Last Few Years, he writes that Meredith's "statue" has been removed from the Gallows, but in KE, it's still there. --Koveras Alvane (talk) 09:34, May 11, 2017 (UTC)

What about the statue being in the Black Emporium before the Tresspasser?

I would like to resolve this issue by addressing both concerns with statements from the dragon age development team. First meredith's remains; 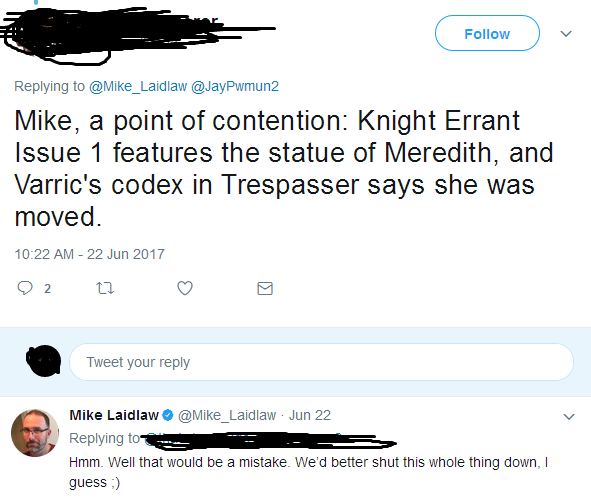 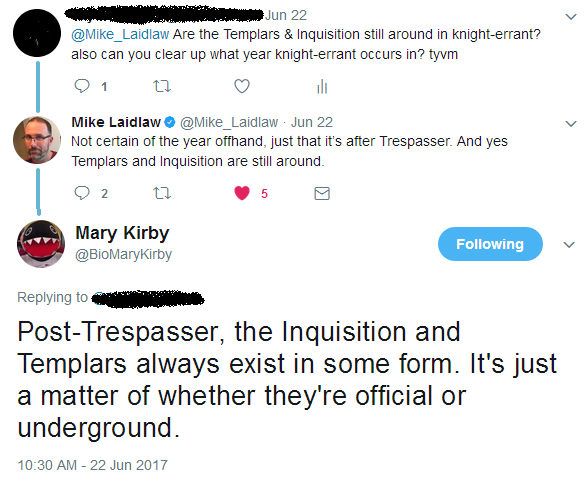 Thank you and good night -

This whole thing's muddled. Varric definitely says that he's not officially a Viscount until the ceremony on the day of their arrival in Kirkwall. Goddamnit, why does BioWare have so much trouble with their timelines?

I believe Varric is referring to the ceremony marking the final formalization of the position. Also given the comic is semi-outsourced, I don't know if you can lay it at bioware's feet entirely. Now that I think about it, does Varric even say during Trespasser that he has already been through the coronation ceremony? Either way regardless, Knight-Errant occurs after trespasser.

I just discovered another timeline discrepancy. So according to established trivia from the tabletop RPG, the arl became arl during the Fifth Blight, after his brother died, around 9:30. But here are the facts:

So he couldn't have been the arl during Vaea's parents being killed because it's a few years before he became the arl.

Retrieved from "https://dragonage.fandom.com/wiki/Talk:Dragon_Age:_Knight_Errant?oldid=793520"
Community content is available under CC-BY-SA unless otherwise noted.