The introduction needs to be more complete sentences. Also, what the hell is the territory marking game?Cheeseslayersmu 15:57, 25 May 2009 (UTC)

The territory-marking game is apparently referred to as Mabari Dominance, and revolves around Dog 'marking his territory' on significant landmarks. The flavortext seems to indicate that doing so provides him with attack/defense/etc bonuses while in the areas near where Dominance is in effect. NinjaWeazel 17:17, November 5, 2009 (UTC)

When you enter denerim and have dog in you party, while passing by Church, dog will run off and bring back some boy. In the end you tell your dog, he can't take that boy with him and have to return him. Something should be written about that situation, either here or in "easter eggs" article?? I have save, and could provide with dialogues if needed. --Tsumetai Ryujin 20:00, November 29, 2009 (UTC)

Surely I can't be alone in noticing that in spite of being referred to as "he", Dog doesn't have the unfortunately distinctive male features typical of canines. Is this a result of prudishness or is Dog indeed a "she"? --vom 10:07, December 12, 2009 (UTC)

You guys never noticed the way he lifts up his leg to pee, or the fact he marks territory? Both things Male dogs are usually found doingAgent51

Yes and they are both actions that female dogs do not perform.

Dog retrieved the Duty helmet for me on my first try immediately after I entered the Aeducan Thaig. I added it to the list of places the helm can be found. --Hunterofjello 08:40, December 21, 2009 (UTC)

For anyone interested, I finally got tired of listening to Dog bark incessantly while I was trying to speak to my companions at camp, as it tends to drown them out. I didn't want to resort to just turning Sound Effects off or WAY down (although this will effectively muzzle him), so I did a search to see if this barking was being triggered by something (not enough pats on the head!) and found this reply from Gabochido, from Bioware:

"I cant comment on any updates or mods to quiet him down, but I can tell you a little bit about the development and how it works. Please don't read this if knowing how the game is programmed ruins the magic and suspension of disbelief for you.

(HOW THE GAME IS PROGRAMMED SPOILER)

"The dog, as well as all creatures, has idle animations. Most games have this at least for the main character, its a set of animations (and accompanying sounds) that play after a random amount of time usually used to make the character play "bored" motions. The dog's idle animations mostly involve him scratching and barking and since a good part of AI is still being processed in the background during conversations, he will often go into his idle animation and start barking."

"During development the average random time that passed before characters started playing their idle animations used to be shorter, but the "dog barking too much" complaint came up and we increased the time until everyone that tested the game was happy. Obviously we didn't increase it enough for cat owners."

and when someone asked if there was some modding that could be done via the toolset to fix it:

Sorry, I never really worked with the sound files. I worked more with the animation files and the internal code. In any case, I believe all the sound files are clumped together in one big binary file. If you have access to the 2DA files, there is one called global.xls that contains a variable that's named something like party_members_idle_timer (I can't remember exactly and I don't have acces to it right now). If you can make this variable have a notably larger value and recompile the file, the dog (and all other party members) will reduce the frequency with which they do their idle animations. Sorry I can't help you more as I don't really know exactly how much of the data files modders have access to with the toolset.

The thread can be found here: http://social.bioware.com/forum/1/topic/9/index/199791/1 and I wasn't sure if it was worthy to be put on the main page, so figured I'd put it up in talk and let wiser minds than mine decide. And, maybe some might find the information useful, in any case. Fritti Tailchaser 09:15, December 30, 2009 (UTC)

I'm not entirely convinced about the "plot hole" as detailed in the article: couldn't Dog make his own way to Flemeth's gaff much as he does when finding the player when starting from a non-human noble origin? I don't think it needs to be included, but thought it would be better to ask opinions rather than simply removing the paragraph in question. --vom 22:52, January 1, 2010 (UTC)

I haven't played Human Noble Orgin but if Warden doesn't even wonder how Mabari could go through whole tower full of Darkspawn and find lone hut in the wild forest, that sounds like plot oversight to me. For me Dog finding Warden scene looked like it was luck. Not Dog specifically searching for Warden, but Dog escaping away from Darkspawn and bumping into Warden's team on accident. Xalard 23:07, January 1, 2010 (UTC)

In a way I'd agree, but it does seem to have a parallel with Dog finding you just after leaving for Lothering; I guess the point isn't so much whether it's likely that Dog would be able to outrun the darkspawn horde and locate you over whatever distance but whether it was an oversight. In that regard, I don't think it was. There are similar elements to be found where the game's realism seems a little tenuous, such as its rather flexible concept of time and distance, but I think at some point we have to accept things as they are.
So my point is that I don't think it was an oversight, just the way things are done in Dragon Age. --vom 00:34, January 2, 2010 (UTC)

The most important aspect missed here about this "plot hole" is that Morrigan makes it clear that her description of how Flemeth saves you (turning into an Eagle and swooping down to pick you up) is a fanciful tale. Her last words are something to the effect of "If you want to know what really happened, why don't you ask Flemeth? She may even tell you.". In other words, they didn't want to describe a specific method of rescue; probably to enhance the mysterious and secretive nature of Flemeth and her powers at that point. Or maybe they were just lazy. Either way, there is clearly enough ambiguity implied that the actual manner of her rescue could account for saving Dog as well. I've removed that portion from the page in light of this. Nezroy 18:41, January 19, 2010 (UTC)

Given the events in DA2 (and the fight against her), she most likely turned into a dragon, not an eagle. Dragons might be able to grasp with their hind legs in this world, that would explain it pretty well.

Is there a way to rename the lousy mutt?

Calling him a "Lousy Mutt" just because you were too impatient to listen to the conversation? It should teach you a lesson to be more willing to wait. Some of the conversations in this game are fascinating. Still, I think Dog is an awesome name for a dog, although I renamed mine "Dug". Karshí 19:29, May 15, 2010 (UTC)

I named my dog (2nd play through) Zevran... just to see if anything interesting happens. Haven't gotten to the part where actual Zevran joins yet. 24.35.19.132 (talk)

Is this truly accurate? I thought this at first but realized it just was an item I already had so was added to the stack. Hollowness 04:47, January 12, 2010 (UTC)

How do the talents work?

I levelled Dog and he didn't get any new talents. Does he only gain them at preset levels, or via some other means, or what? Titanium Dragon 05:56, February 4, 2010 (UTC)

Your guess that Dog doesn't get a talent on every level up is correct. I've never really paid attention to which ones they are, but he does seem to get a point every few levels. By the end of the game, he should have been able to learn all his available talents (in my experience, there's also been one additional, unspendable point - presumably a glitch!) ♦ Zoev talk 13:33, February 4, 2010 (UTC)

That's a funny situation ... Buff your party with "Burning Weapons" and enjoy looking at the dog's ass catching fire. That happens because the burning effects are applied to the character's weapons, and since the dog itself is his own weapon his ass catches fire! 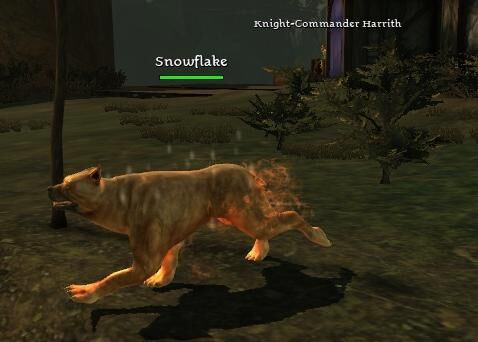 Lol, Snowflake... You should put Frost Weapons if he's called Snowflake. But Dog on fire is nothing! Behold my ice cream dog! 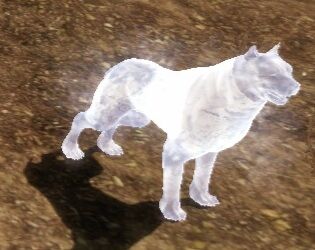 "Unlike other companions Dog's approval never drops below 100 and he can be recruited from both an origin story and a location."

This is in the "Featured Article" text, but isn't mentioned in the article itself..

If his approval never drops below 100, what is the point of the gifts for him?

I just had a look and got the same message. However, the item didn't show up in my inventory. Is anything showing up in yours?

I vaguely remember finding this elsewhere (I don't think I had dog with me during the urn of sacred ashes quest). But I could be wrong.
@Loleil: If it puts gems in your inventory and you already have gems of the same type, it might not become immediately apparent, because they won't be listed as the newest items. Unfortunately the game doesn't update the "found date" for item stacks when you add a new item to the stack, but the should still me marked as new when you scroll through the inventory. Did you check for that? --M.harmless (talk) 09:37, June 22, 2010 (UTC)

Ok, I dug out my old save game and can confirm that a) my memory is rusty at best and b) the sword is apparently always found at the Mountain Top.

Magic Greatsword - This sword also appears in the list of Sacred Urn items in the toolset, but it's not located in any containers or equipped to any enemy throughout the questline. It may be a trigger item for the rusty sword found by Dog, as the tag is different than that of the regular Magic Greatsword. Mictlantecuhtli (talk) 11:31, June 24, 2010 (UTC)

What happens to Dog?

What happens to Dog at the end of Dragon Age Origins?

No one knows. There are speculations about what happened to him. In the Epilogue section says that if the Warden dies, Dog may stay with Sten since Sten respects him and calls him "true warrior" or Dog may stay with The Warden's friends. If the Warden survives, Dog stays with him/her but he doesn't appears in Awakening (which I found very ridiculous) so no one knows Dog's fate. --Rocketai (talk) 02:17, July 23, 2010 (UTC)

Reference to Rabbit in The Calling?

I've read that there is a reference to Rabbit/Dog in The Calling, but I can't find out what it is. Maybe it should be listed here or on the easter eggs page?