“A spirit trapped within a tree, no mouth to scream or eyes to see. A cage of bark, a prison of wood. A thing of rage where nature stood.”―The Grand Oak

Sylvans are trees possessed by demons and malicious spirits from the Fade.

For demons crossing over into our world, mankind is not always the preferred prey. As possessing humans means risking encounters with powerful mages and templars, some demons find it far easier to seek out animals or even plants. Those that possess trees are known as wild sylvans.

Generally, only rage demons become sylvans. The demon will spend considerable time and effort twisting and molding the host to make it mobile. A sylvan is a walking tree and if violent can prove very dangerous. Other, more intelligent, spirits have also been known to become sylvans. These are rare, but generally much less threatening.

Slow but immensely powerful, wild sylvans prefer to lie in wait for a victim to become lost, tired, or trapped in the forest. They hide among regular trees, nearly undetectable until they begin to move and reach. When they "come to life," as some travelers say, sylvans stand tall, with roots forming legs and branches stretching into lashing arms.[1] While generally slow to move and act, some sylvans have been noted to move with startling speed.[2]

When not presented with a living target, however, it has been noted that sylvans often fall into a form of dormancy, perhaps brought on by the nature of their tree host. While mobile, they normally return to wherever they were rooted once their prey has been killed. For both these reasons, a forest that has sylvans within can become incredibly dangerous to pass through for very long periods of time. [3]

The Grand Oak
The Old One 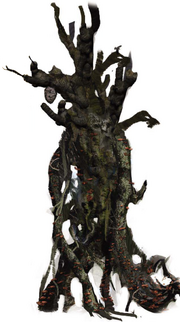 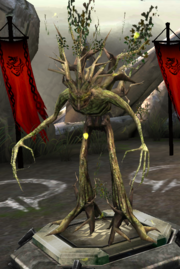 A Sylvan in Heroes of Dragon Age 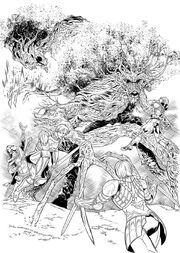