Swiftrunner seems to be the second-in-command to Witherfang and will attempt to dissuade The Warden's group from killing Witherfang on two occasions. Swiftrunner is first encountered on the small island with three bridges in the West Brecilian Forest. It is possible to avoid a fight on this occasion with a high enough persuasion skill, though if you choose to fight it will end once any of the werewolves take 50% damage. The next time The Warden meets Swiftrunner, a fight is unavoidable because Witherfang is also present; however, before the Warden deals the final blow to Swiftrunner, Witherfang will step in and save him. A final face-off with Swiftrunner will occur upon meeting the Lady of the Forest.

If the Warden persuades the werewolves to attack Zathrian's clan and recruits them to aid against the Blight, Swiftrunner will appear as an ally atop the roof of Fort Drakon during the final battle against the Archdemon (PC only). 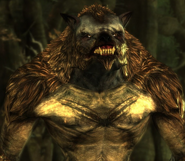 Medium Closeup
Add a photo to this gallery
Retrieved from "https://dragonage.fandom.com/wiki/Swiftrunner?oldid=874205"
Community content is available under CC-BY-SA unless otherwise noted.