Svarah won her legend-mark 'Sun-Hair' for a battle in which her hair was set aflame by an enemy archer. Cornered by other opponents, she had no time to put out the flame, earning her the epithet which she wears to this day. Since then she has ruled Stone-Bear Hold with temperance and wisdom. Svarah has little love for the Jaws of Hakkon, feeling their pronounced warlike nature can only end in disaster but maintains a diplomatic if cold relationship with Gurd Harofsen and their neighbouring Avvar.

Svarah first encounters the Inquisitor when they come seeking permission to visit the island on the nearby lake, which is held sacred by the Avvar of Stone-Bear Hold. Svarah grants them permission to go but refuses to join the Inquisition in combat against the Hakkonites due to an existing treaty between the two holds. Svarah also requests that the Inquisitor aid them in their search for Storvacker, their sacred Hold-Beast who has recently vanished.

Upon discovering that the Hakkonites were responsible for Storvacker's abduction, Svarah becomes enraged at their betrayal and readily pledges to aid the Inquisition in their battle with the Jaws of Hakkon. Svarah rallies Stone-Bear Hold to assist in assaulting the Old Temple where the Hakkonites are based. Their combined forces are enough to put an end to them. Afterwards, if the Inquisitor has completed Guests of the Hold, Svarah bestows them with a legend-mark (a ritual epithet among the Avvar), naming them Inquisitor First-Thaw. 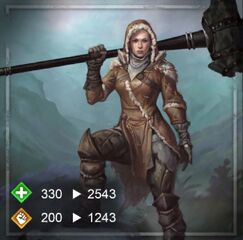 Artwork of Svarah in Heroes of Dragon Age