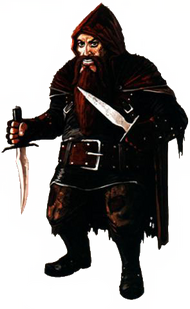 Cloudgazer, stone-blind, skyer—these are how dwarves describe their surfacer cousins. It's traditional to snort these words with disdain. A dwarf who goes "topside" forfeits his caste, his house, and the favor of his ancestors. Once he sets foot on the surface, he is no longer welcome in Orzammar.

Still, in recent years a great many dwarves have moved to the surface. Some are casteless and have nothing to lose. Others believe they have something to gain. Some think it's only a matter of time before Orzammar falls to the darkspawn.

Then there are the merchant caste dwarves with their frightful flair for business. I met one who nearly talked me into buying my own hat. I daresay most merchants don't give a nugget about losing their caste or the favor of their ancestors—not the way they're compensated!

—From Tales from Beneath the Earth, by Brother Genitivi
—From Codex entry: Surfacer Dwarves

Many dwarves have moved on the surface, either as members of expeditions funded by dwarven houses or guilds[1], for their own personal reasons[2], or as a punishment.[3] In ancient times, the punishment of exile was very uncommon and was considered to be one of the fiercest.[4] According to dwarven scholars, surface dwarves may soon outnumber their underground-living peers.

The Shaperate considers surface dwarves to rank amongst the casteless, having given up their caste and claims they may have held--and worst of all, no longer being recognized as a dwarf after having left the embrace of the dwarven progenitor, the Stone. Surfacers forfeit their houses too if they are noble.[5] Despite that there is still debate amongst dwarven politicians about whether or not those who have left Orzammar for the surface should be considered permanent exiles or not, usually fueled by personal and financial interests.[6] One notable exception is when a dwarf joins the Grey Wardens. Due to the sacred duty of fighting their ancient enemies, the darkspawn, it was decided that a dwarf who joins the Grey Wardens retains their caste.[7] This, however does not apply to dwarves who had already gone to the surface before officially deciding to join the Wardens.[8]

One would assume on the surface, the surface dwarves would rid themselves of the caste divisions. However, the truth is that thousands of years of tradition are not so easily tossed aside. Even though surface dwarves are officially stripped of their caste, many maintain a hierarchy among themselves along the old caste lines. Formerly noble houses are accorded more respect than casteless brands who come up in search of opportunity. The poorest "noble" dwarf on the surface looks upon the rich "lower caste" dwarves with contempt.

Upper-class surface dwarf society is roughly divided into two camps: kalnas, who insist on maintaining caste and rank (typically those from the Noble or Merchant caste families) and ascendants, who believe in leaving Orzammar's traditions underground and embracing life in the sunlit world. Generally, a surface dwarf's life often leads them to become merchants or craftsmen,[9] parleying the skills they may once have held underground into a new life on the surface. Maintaining some tie to Orzammar was seen for generations as the only lifeline for surface dwarves. Bringing surface goods to their kin underground and lyrium and metals to the surface was not only the most lucrative means of making a living, but also a sort of sacred duty, as many surface dwarves willingly accepted exile and the loss of their caste to better serve their house or patron.

In recent years, many surface dwarves, particularly ascendants, have branched out. They started banks, mercenary companies, and overland trade caravans. They became investors and speculators in purely surface trade. These new industries have proven tremendous sources of wealth, but are looked down upon by their more conservative kin.

For less-affluent surface dwarves, association with a powerful kalna can open many doors. They can get credit with dwarven merchants and are offered work opportunities by the powerful Dwarven Merchants' Guild more readily, sometimes, than more qualified but less-connected individuals.[10]

After time on the surface, a dwarf also begins to lose their "Stone sense", a sensitivity to the Stone that allows a dwarf to navigate below the surface.

Most of the first surface dwarves were members of the Merchant caste which served as ambassadors from Orzammar to the surface, but the wealth this trade produced caused these merchants and their families to break ties with Orzammar and dwarves as a whole in order to keep the profits for themselves. This exodus was viewed as a bitter betrayal by the rest of the dwarves and the reputation of the Merchant caste had never managed to regain ever since.[11]

As seen by outsiders[edit | edit source]

If the average human, or even elf, were to encounter a dwarf they would most likely assume them to be a merchant[12] or a smith (at best).[13] Non-dwarves do not discern dwarven caste divisions and thus they lump all surface dwarves together as an undifferentiated people.[14] On the surface, surface dwarves generally have the same rights as any average human. For example, surface dwarves can own their own businesses, claim land, and be legally married to anyone by the Chantry.[15]

Dwarves on the surface are also considered casteless once they leave their underground thaig, though it is only relevant to those who return--if they are allowed to return at all. Dwarven traders from the surface are allowed to enter and to sell their goods (grains and wood are especially valuable in the dwarven kingdom), but they have no rights and are considered to be no more dwarven than those few humans and elves who do the same.

Surface dwarves are confined to a trade stall in the Orzammar Commons and are prohibited access to any other area in the city.[16] Owning and operating of stalls or kiosks in Orzammar is limited to those of identified and approved house names with traceable Ancestor lineage of at least three generations. Exceptions of casteless dwarves being allowed to conduct business in the Commons include individual purchases of goods or services from established stalls or kiosks, provided the funds are presented at the opening of the transaction, at the discretion of the stall or kiosk owner.[17]

Since surface dwarves are casteless, they are required to wear a "brand" (i.e., a facial Tattoo) in order to peddle their wares in Orzammar. Despite their distaste for the practice, surface dwarves think of the brand as a license to vend their wares; thus they tattoo with washable ink which comes off when they leave for the surface.[15]

Dwarves who choose to live on the surface lose their connection to the Stone and the favor of the Ancestors, and thus are worthy of little more than pity to an Orzammar dwarf, for upon dying they are said to be lost to the Stone forever. Slurs such as "Cloudgazer", "Air-touched"[5], "Sun-touched" or "Lost to the Stone"[5] are commonly used to refer to their surface kin. Even the casteless dwarves of Orzammar look down on their surface kin.[18] Some surface dwarves think their Orzammar kins' contempt is hypocritical since they still buy the goods they bring in despite their disdain.[16] Most perplexing to surface dwarves are the casteless who choose to stay in Orzammar despite being disenfranchised the most by the caste system and arguably there being better prospects if they left for the surface.[15]

Sometimes, either for political reasons or to escape the social rank forced upon one by the caste system, dwarves will flee from Orzammar to the surface. Many of the casteless who do so will often go through sometimes extreme measures to remove their tattoos (derogatory known as "brands"), simply because of the constant reminder they provide of what they left behind.[19]

Amongst the surface dwarves[edit | edit source]

Theoretically, all the business of caste is left behind in Orzammar and under the open sky every dwarf is equal. The truth is, though, that thousands of years of tradition are not easily discarded. A hierarchy still remains among the surface dwarves with members of formerly-noble houses being accorded more respect.[20] Formerly upper-class surface dwarves are either a kalna (typically those from the noble or merchant caste who insist on maintaining rank) or an ascendant, who desire to begin anew.[21]

Retrieved from "https://dragonage.fandom.com/wiki/Surface_dwarves?oldid=886517"
Community content is available under CC-BY-SA unless otherwise noted.