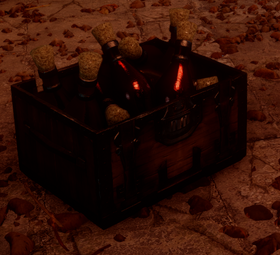 Supply Caches are containers where Healing Potions can be resupplied. The are found scattered throughout Thedas, often in areas that contain important quests or boss battles.

The amount of potions a supply cache contains is based on the maximum number of potions the party can carry. The base amount is 8, though the Inquisition perk More Healing Potions will add an additional 4. Unlike other containers, a loot window does not open when the cache is selected; selecting the cache will automatically fill your potion supply.

This section contains spoilers for:
Dragon Age: Inquisition.
Retrieved from "https://dragonage.fandom.com/wiki/Supply_Cache?oldid=813744"
Community content is available under CC-BY-SA unless otherwise noted.