The Storm Coast is a rainy coastal region in Ferelden located in the northwestern-most part of the country.

Ancient dwarven ruins dot the landscape from a long abandoned time. Prior to the First Age, the dwarven people maintained a sizeable presence on the coast. Mining guilds were drawn to the area's then-plentiful mineral deposits.[1]

Built into the cliffs of the Storm Coast, the subterranean port at Daerwin's Mouth once connected the dwarven thaigs to the Waking Sea. In addition to increasing trade between the dwarves and their allies in the Tevinter Imperium, direct access to the Deep Roads meant diplomats from Orzammar could visit the port without fear of losing their "stone sense." The site thus became a popular meeting place for ambassadors of the two nations.[2]

All dwarven activity ceased when darkspawn incursions forced the Deep Roads to be sealed, hence severing the region from Orzammar.[3] After the dwarves retreated back into Orzammar the port fell into disuse. At least, all reputable use of the port ceased —bandits, smugglers, and pirates are known to still use the various caves and waterways along The Coast, including Daerwin's Mouth itself, for their own personal gains.[2] But that hasn't stopped the region from boasting more than its fair share of tragic tales. If all are to be believed, rich merchant ships blanket the depths due to the follies of their proud captains.[4]

The large statue situated at Morrin's Outlook once served as a marker for ships coming to trade with the dwarves. Beyond an assumed connection with the great port at Daerwin's Mouth, nothing is known of the statue's namesake.[5]

Sometime later the Blades of Hessarian made their way to The Coast; they are an ancient secret society who believe they serve Andraste and were chosen to bring her judgment upon the weak and the corrupt. The order was founded, according to their tales, by the Tevinter slave Trefir, who returned to the lands of the Alamarri bearing the Sword of Mercy. Since then, the Blades followed the one who bore the sword with unquestioning loyalty, as he or she was considered to have been chosen by Andraste.[6]

The Storm Coast is a sparsely-populated stretch of shoreline along the Waking Sea. Ancient dwarven ruins—abandoned since the Divine Age—still line the coast, their architects long forgotten.

“These notes were found near murdered Inquisition soldiers:
We are the sword, not the hand that wields it. If they’re worthy, let them come with the Mercy's Crest.”―bandit's note

The Inquisitor travels to the Storm Coat to investigate the disappearance of the Grey Wardens. Upon arrival, they learn that Inquisition soldiers have gone missing. They also learn that the Storm Coast has become host to a troublesome group of religion inspired bandits, the Blades of Hessarian, that darkspawn have been sighted in the area[7], and that a number of boats with the Templar Order insignia have washed up along the shoreline. The Storm Coast is also the location where the Inquisitor has the option to recruit Iron Bull as a companion, which can be done almost immediately after arrival, and the Blades of Hessarian as agents of the Inquisition.

The Inquisitor can gain access to The Coast by completing the Scout the Storm Coast war table operation in Haven or Skyhold.

Note: The western most section of the region is only accessible through a gate that is locked until the side quest Red Water is acquired; this, in turn, requires that the Inquisitor be at or above level 16, and have completed the war table operation Red Templars on the Storm Coast. The gate can be found north by northwest from the Driftwood Margin Camp.

Note: The 10 regions below make up the Regions on the Coast collection. Discovering them all grants 200 Influence.

Keeping the Darkspawn Down

Vigilance on the Coast

Wardens of the Coast

Rifts on the Coast

Rift at the Falls

Antivenom Requisition on the Coast

Iron Survey on the Coast

Salvage Requisition on the Coast

An Offer from the Blades of Hessarian

Red Templars on the Storm Coast

Restore the Port on the Storm Coast

Blades of Hessarian (can either be hostile; or allies if recruited as Inquisition agents)
Red Templars
Venatori (only during the side quest Demands of the Qun)
Darkspawn

Vintage: Warden Anras - southeast of the Small Grove Inquisition Camp, search the top of the cliff, on the northern side, overlooking the Long River .

Vintage: Warden Riordan - search inside a hut east of the Driftwood Margin Inquisition Camp; items for Memories of the Grey and Wardens of the Coast are found inside as well.

Shards on the Coast

Dwarven Banner Crown - looted in the room just after encountering the Behemoth in Daerwin's Mouth or obtained from the Burial Grounds Tomb in the Hissing Wastes.

Free Marcher Banner Crown - acquired in the cave revealed from unlocking Astrariums on the Coast.

Codex entry: The Storm Coast's Claim - found on a hill on the south side of the Long River, search the ground next to a vase filled with arrows overlooking the rive (the location is almost due south of the cave icon closest to the Small Grove Inquisition Camp).

Lightning Rune Schematic - inside the Waterfall Cave, located in the far southeast section of the World map; the glyph is halfway into the cave, on the left, and the veilfire brazier is further in near the dwarven statue and the waterfall.

Bane of Red Crossing - acquired in the cave revealed from unlocking Astrariums on the Coast.

Bianca Aiming I (Enhanced) Schematic - found in a chest in an unmarked dwarven mine located east of the Hessarian Camp.

Dread - looted from a chest just prior to completing Iron Bull's companion quest Demands of the Qun.

Fragment of Inadequate Chain Mail - found on a corpse just west of the Dragon Island docks.

In Peace, Vigilance - looted from the Vinsomer high dragon.

Mercy's Crest - the requisition to craft the amulet can be obtained from a sheet of paper in a run-down shack with Inquisition scout corpses; see side quest Cleaning House.

Mighty Offense Tonic Recipe - looted from a chest locked away in a cabin located in Apostate's Landing; see side quest A Glowing Key.

Prismatic Greataxe - acquired in the cave revealed from unlocking Astrariums on the Coast.
Note: Trespasser required.

Schaefer's Rampart - looted in a chest in an unmarked dwarven mine east of the Hessarian Camp (see marked location in the gallery below).

Superb Ring of Flanking - looted from the Vinsomer high dragon.

Codex entry: From the Canticle of Transfigurations

Codex entry: In the Mists: The Windline Marcher 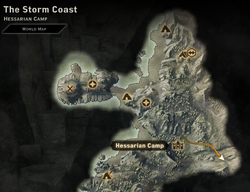 Location of the mine 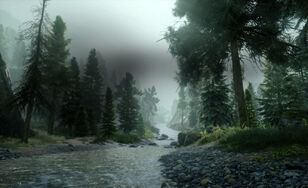 Small stream heading to the sea

Abandoned boat on the coast 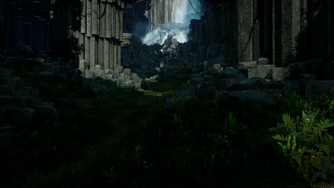 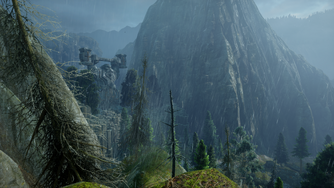 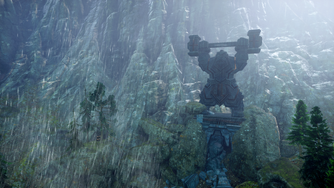 Dwarven statue within the forest 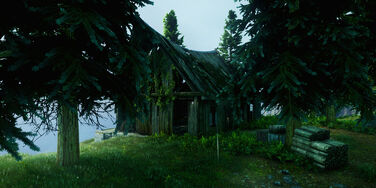 Abandoned hut on a cliff 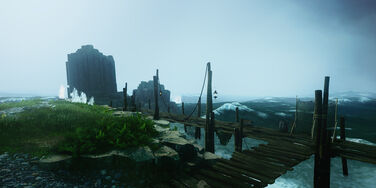 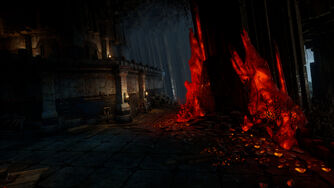