The Staff of Violation is a unique staff in Dragon Age II. It is a black staff with three dragon-like heads, owned by First Enchanter Orsino.

This section contains spoilers for:
Dragon Age II.
Hawke can loot this item from Orsino's corpse after defeating him in his Harvester form during the Act 3 quest The Last Straw.

First Enchanter Casimira was no blood mage! Hogwash! Your story of her investing dark arts into the staff is just that: a fable.

Casimira was, in fact, the first leader of Kirkwall's Circle of Magi. She was saddled with the great task of transforming a decrepit, crumbling prison into a proper home for mages transferred to her from all over Thedas. Some of those mages were apostates, men and women one step away from being rendered Tranquil, and it was her unfortunate task to keep order.

How many battles did she fight in those early days? How much blood was spilled on these grounds? Casimira had to be a hard woman, but she did it to keep the templars from declaring the Right of Annulment and killing us all.

And your other rumor that she was arrested by the first knight-commander? I am telling you it isn't so. I have studied the records, and the truth of the matter is that Casimira was taken by a demon and slain before she could endanger the tower. The templars admired her strength in holding the demon back long enough for them to act. It was a noble sacrifice, and Casmira's staff was kept by the first enchanters to commemorate this. It saddens me that people choose to dwell on its form rather than the lesson it signifies.

—A letter by First Enchanter Orsino, 9:26 Dragon
—From Codex entry: Staff of Violation 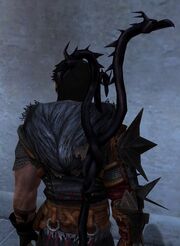 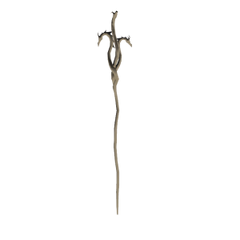