“Your mages have devised a cowardly test. Better you were pitted against each other to prove your mettle with skill, than to be sent unarmed against a demon.”

Valor is a benevolent spirit met by the Magi protagonist in the Fade during their Harrowing.

Valor is a spirit of combat, having fashioned weapons with his will. He will offer the Magi a staff for use to defeat the demon, provided they defeat him in a duel of combat. Mouse notes that he never seemed equal to his name.

This section contains spoilers for:
Dragon Age: Origins.
The Magi can take up his request for a duel; upon defeat he awards you Valor's Staff. Alternatively, the Magi can use their Willpower to accuse it of wanting to kill the apprentice, and demand he prove its good intentions by giving you the staff. If you agree to a duel, you can choose to kill it afterwards for additional XP. Be careful however as the fight will resume with the Spirit of Valor at half health. 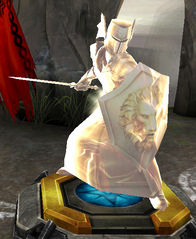 Spirit of Valor in Heroes of Dragon Age
Community content is available under CC-BY-SA unless otherwise noted.
Advertisement