Edit
watch 03:19
Wiki Targeted (Games)
Do you like this video?
Play Sound

Few mages are watched more closely by the templars than spirit healers. For all the good they can do, their consorting with any denizen of the demon-infested Fade is a matter of intense suspicion. Still, the benefits outweigh the risks, if only just.

Spirit Healer is one of the specializations available to the mage class in Dragon Age II.

Spirit healers focus on restoration, not destruction. They know that the best way to win a battle is to keep themselves and their allies in the fight as long as possible. They are the mages most likely to be accepted—or at least tolerated—by common people, and yet templars fear them as much or more than the damage-focused specializations. No other mages so directly draw their power from the beneficial spirits of the Fade. It's a risk, but the rewards are undeniable. Removing injuries, granting resilience to wounds, even rescuing comrades from the brink of death—these are not support abilities, they are the core of any effective party. Any fool can cause harm, but no amount of muscle can make a weapon heal.[1] 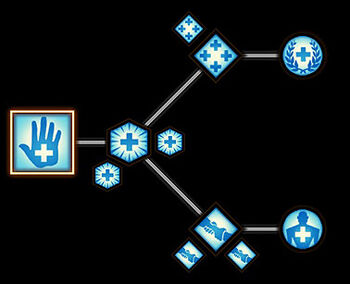 Sadly, due to design limitations (10 spells per school of magic) and an arguable spell allocation (Vitality not a Creation spell), the Spirit Healer class specialization isn't as useful as it used to be. The most potent support spell - Heal (incl. Greater Heal) - isn't part of this category.

A well organized team might be just fine with this single heal spell (and a few potions) and even Blood Mages can use it. Either on other party members or to recover most of their hitpoints, should they turn off their Blood Magic aura for a moment.

That being said, it can be combined with Blood Magic for interesting results. (No longer the case with patch 1.03 installed)

Healing Aura reserves 30% of your mana pool, Blood Magic requires 70%. So it's possible to activate both. This way, you never have to worry about using Sacrifice on a party member, just patch him up with a Group Heal.

Keep in mind though that the remaining Blood Magic abilities count as offensive spells. So you should either limit yourself on Blood Magic and Sacrifice., or deactive either aura depending on the current situation.

And although you're not allowed to cast offensive spells while Healing Aura is active, there are still enough other spells (all the Creation spells, Dispel Magic, Barrier, as well as some Entropy and most Force Mage spells) can be used to aid in survival for the mage and allow them to keep their party going strong.

Especially thanks to the Creation spells, it's also easy to play a purely defensive mage without Blood Magic. Haste alone already makes it worth it... and Heroic Aura can be used to bolster the party even further, thus negating the need of offensive spells in combat by simply using the rest of the party for damage.

Such a support character also works well in Nightmare mode and it's easy to set up proper tactics.