watch 02:40
Who is Solas?
Do you like this video?
“I have seen things in my journeys that most can only dream of. Literally.”

Solas is an elven apostate Hedge mage, an expert on the Fade and companion in Dragon Age: Inquisition. He is a potential romance option for a female elven Inquisitor only.

Solas grew up in a small village,[1] though he spent most of his life alone in the wilderness and is technically neither a Dalish or city elf.[2] Despite having no contact with the Circle of Magi or any Dalish tutors (though he has had contact with clans during his travels),[3] Solas taught himself how to master his magical abilities. Solas' prime interest is in the Fade, happily spending his time dreaming in ancient ruins and learning all there is to learn about what dwells beyond the Veil rather than joining the current Mage-Templar War.

Solas is an introvert, and sometimes shows a subtle wit.[4] Though he may be considered a "Hedge mage" by the Circle of Magi,[5] Solas has some unique magical tricks of his own, such as a form of lucid dreaming to experience the hidden history of areas where the Veil is thin and how to manipulate the rifts in the Veil in unique ways via his knowledge of the Fade.[6] As such, he is more open minded about the Fade and its denizens than most Thedosians, who in contrast have been taught by the Chantry to fear anything related to spirits.

Fundamentally, Solas believes that the many current conflicts in Thedas - mages against Templars, elves against humans, spirits against demons - are little more than the black-and-white reductionist dichotomies of others which has led to the many tragedies that have occurred up until now.[7]

When Solas witnesses the Breach, he seeks out and joins the Inquisition, knowing that he will be able to provide knowledge on the Fade that others simply will not.

Solas appears with Varric Tethras in Haven following the opening of the Breach. He helps the Inquisitor seal a small rift, and then follows them to the Breach itself to attempt to close it. Following the attempt, with the Breach still active but stable, Solas spends the bulk of the next three days tending to the unconscious Inquisitor and keeping their mark from killing them.

Following the destruction of the Inquisition's base in Haven, Solas explains the elven origins of the Elder One's orb weapon to the Inquisitor. He elaborates that the orb is called a Foci, which was used to channel ancient magics. He then directs the Inquisitor to the new headquarters of Skyhold, in the Frostback Mountains.

Later on, Solas asks the Inquisitor for aid in rescuing a Spirit of Wisdom who had been summoned to the physical world by mages against its will. Upon finding the spirit in the Exalted Plains, Solas discovered the mages who had summoned it had turned the spirit against its nature to protect themselves from bandits, transforming it into a pride demon. Destroying the binding pillars reverted the demon into a feminine humanoid form. As the spirit passes, Soals turns his anger on the mages. The Inquisitor can either talk him down or permit him to murder the group. Solas then leaves the party and returns to Skyhold.

In the Temple of Mythal, Solas and the elven Temple Keeper Abelas explain the history of the fall of Arlathan, as well as the true origins of Vallaslin.

In a post-epilogue conversation, it is revealed that Solas is responsible for the Elder One obtaining the destructive orb he wields against the Inquisition. Furthermore, it is revealed in this conversation with Flemeth that Solas is in fact known to her as the Dread Wolf, and that they are old friends. Solas gave the orb to Corypheus seeking to unlock its true power, because he was unable to due to being too weak after awakening from his long slumber. Recognizing that he deserves punishment, but deeming himself too prominent to be killed, Solas admits that "I should pay the price, but the People, they need me." Following this exchange, Flemeth embraces him in disappointment and apologizes to Solas, only to appear to die suddenly. It is unclear what actually happens after this, but it appears to show Flemeth's essence transferring into Solas' body. [8]

Solas' approval can be raised by asking questions and being thoughtful. He also responds positively to actions that generally support mages and elves, and to an open-minded attitude about magic and the Fade, as well as spirits and demons. Remaining stubborn or becoming defensive on issues of elven culture, particularly if the Inquisitor is an elf, can lead to a reduction in approval.

Completing the quest "Measuring the Veil," as well as related quests to strengthen the Veil and secure elven artifacts, also leads to increased approval from Solas.[9]

Solas is a potential love interest for female elven Inquisitors. Flirtation may begin almost immediately following the Inquisitor's awakening in Haven after stabilizing the Breach. The first chance to kiss Solas occurs during a conversation with him in the Fade version of Haven following the establishment of Skyhold, if flirt options have been taken. Pursuing Solas' personal quest, "All New, Faded for Her," may also bolster his approval of the Inquisitor or else break off the romance, depending on the outcome and dialogue options chosen. At this point, the player can choose to officially begin a romance with Solas.

Following events at the Temple of Mythal, Solas may ask to spend more time with the Inquisitor, culminating the romance.[10] Though he does not have a specific gift for the Inquisitor, Solas offers her the truth of the nature of vallaslin to show that she is important to him and deserves to know. He also offers to remove the Inquisitor's vallaslin, which the player can accept or reject.

Solas with Cassandra Pentaghast and the Inquisitor 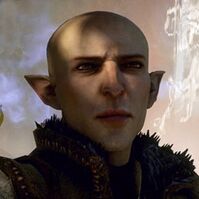 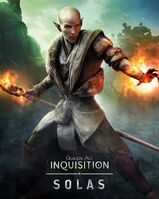 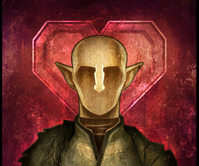 GW Battlemage1.PNG
Solas in Grey Warden mage armor and cowl
Add a photo to this gallery

Retrieved from "https://dragonage.fandom.com/wiki/Solas?oldid=636595"
Community content is available under CC-BY-SA unless otherwise noted.