Softened refers to optional personality changes for Leliana in Dragon Age: Inquisition. The change affects future character dialogue, the overall attitude of the character, and Leliana's methods of dealing with opposition as the Divine, if elected. 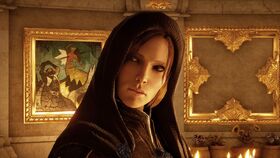 In the game, Leliana is hardened by default regardless of whether or not she was hardened in Dragon Age Origins. As hardened, she will kill those she believes guilty of betrayal and question herself when she shows weakness. She will often remark on how killing can be a necessity when dealing with those who oppose the Inquisition. If elected as Divine, she will meet her opposition with ruthless force. If you wish for Leliana to remain hardened, you only need to avoid the dialogue options below.

To soften Leliana, it is strongly recommended you follow every dialogue option listed below. Missing even one could result in Leliana remaining hardened. In each dialogue wheel, only one choice will soften Leliana, all others will result in no change.

The Left Hand of the Divine

After performing all dialogue options above and viewing the final cut scene, Leliana will be softened. If she is elected Divine, Leliana's urgings for unity take root and the Chantry remains strong.

Retrieved from "https://dragonage.fandom.com/wiki/Softened?oldid=783467"
Community content is available under CC-BY-SA unless otherwise noted.