The smith caste is the caste of dwarven society responsible for the means of production and their applied use. Their work is intimately tied to that of the artisan caste as the two castes work in tandem to create armor and weaponry and other items. Artisans ornament the items crafted by the smith caste.

According to legend one of seven dwarven brothers, Orzatyar, forged the first swords and thus founded the Smith Caste.[1] Orzammar is the ancestral seat of the Smith and Mining castes.[2]

In the complex web that is dwarven society, the Smiths are responsible for providing the finished goods required by the other castes, such as weapons and armor for the Warrior caste and tools for the Mining caste. Some smiths are also experienced rune crafters. As with the other castes, there are draconian rules governing many aspects of their lives, such as inheritance, marriage, etc. There appears to be some leniency in terms of smiths selling their own merchandise, however. For example, Janar is a smith but he also acts as a merchant and owns a shop, meaning that the Smith caste may be allowed to act as merchants under certain circumstances. Another case is that of Garin, a lyrium-addled smith now acting as a shopkeep in the Orzammar Commons.

Named after Paragon Hirol, the great thaig of Kal'Hirol served as the center of learning of the smith caste. However with the thaig's fall during the First Blight[3] a lot of dwarven smithing knowledge was lost too.[4]

Smiths jockey for position amongst others of their caste by displaying their skill and prowess in competitions.[5] Other dwarves delight in buying the displays of craftsmanship these competitions produce. Weaponsmiths, followed by armorers, are the most highly regarded smiths.

Smith houses are listed in an alphabetical order and those whose status is unknown have their name italicized. 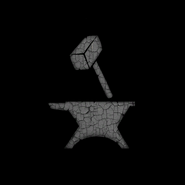