Skyhold is a fortress in the Frostback Mountains and serves as the headquarters for the restored Inquisition.

Known as Tarasyl'an Te'las ("the place where the sky is kept" or, more specifically, "the place where the sky was held back") in ancient elvish,[1] Skyhold is a fortress located in a stretch of the Frostback Mountains near the Dales, on the border between Orlais and Ferelden, controlling a mountain pass from the kingdom to the empire.[2][3][4]

The mountain peak it was built on was the site of rituals carried out by the elves during the height of their civilization, but was later leveled by early Fereldans to provide the foundation of the fortress, making the Keep Fereldan.[5] Ownership of Skyhold has since changed hands many times. During the late Divine Age, it was occupied by a Fereldan enchanter who unsuccessfully sought to learn why the site had been so important to the elves. At one point, even dwarves took residence there.[6] The last known owners of Skyhold lived certainly after the Third Blight with Mason Gatsi suspecting that they had also an extensive trade network.[7]

When Skyhold was rediscovered by the Inquisition, it had fallen into considerable disrepair in the years after its unknown last inhabitants had abandoned it. However, by this time, the magic of the original elven site had permeated the stones of the keep, protecting it from evil.[8]

A living tree was once a symbol of peace between two forgotten factions. Before the first stones of Skyhold's foundations were laid, the tree was cut down, slabbed, and polished to serve as a massive war table.[9]

There is now a clearly marked mountain route to Skyhold; the climb is said to take a week.[10] Once in the valley that Skyhold overlooks, people and pack animals can be brought up via a cable lift. There is only one approach to Skyhold.[11]

Skyhold used to be Solas' stronghold.[12]

The Archivist in the Sundered Hall of the Shattered Library stores the following memory: "After he held back the sky to imprison the gods, the Dread Wolf disappeared". Thus Skyhold is the place where the Veil was created, as evident from its ancient name.

Along with the Inquisitor, companions and advisors reside here. Leliana will make a place for herself in the fortress' rookery. Sera, Iron Bull and Cole can be found in the Skyhold tavern Herald's Rest, Cassandra is usually training by the armory, Cullen can be found in a tower adjoining the gatehouse and Blackwall at the stables. Dorian can be found in the library and Solas in the atrium beneath it, and Varric and Vivienne can be seen in the Throne Room. Finally Josephine has made a place for herself in her office next to the Throne Room. The fortress will serve as a hub for romantic encounters and catching up with companions.

The Inquisitor's central command is the war table, which will determine where to focus the Inquisition's attention. From here operational areas can be unlocked and agents can be dispatched on missions. From the Skyhold throne the Inquisitor will hold court and Sit in Judgment over a variety of characters, passing sentences from execution and tranquillity, to making them court jester, or even recruiting them to the Inquisition.

Callback
Following the disbanding or re-structuring of the Inquisition, Skyhold poses a problem. It was judged too symbolic to be razed and too fortified to be completely abandoned. It was eventually decided that the fortress would be preserved, but defanged. Skyhold is left in the hands of a small group of caretakers, led by a brother of the Chantry with an unremarkable name.

After the caretaker reports his intention to restore the fresco, Skyhold goes silent and a supply caravan disappears. Donal Sutherland and his company are sent to investigate. He suspects that they were chosen because they are small enough to disappear, that they are being used to give officials license to permanently erase the Inquisition's legacy.

Once in Skyhold, Sutherland discovers that the caretakers have been killed by a demon of Regret, formed out of the plaster of Solas' frescos. With the help of his company, as well as that of various former members of the Inquisition, the demon is sent back to the Fade. Divine Victoria later says this of Skyhold: "Know that Skyhold remains, its fires bright. Forever it is where you are from, not where you are bound. Attempt no travel there. Let the past guide you to a new direction."

At the time of its rediscovery by the Inquisition, Skyhold has deteriorated considerably. The Inquisition brings on a number of workers to help restore the fortress to its former glory. The renovation process spans three stages.

Skyhold can be customized and upgraded by the player. Customization options include: banners, beds, drapes, heraldry, decor, thrones, and windows.

Most of these options need to be unlocked by buying them in shops, completing quests or through exploration. The throne can be further upgraded with accessories as well.

In addition to the furnishing customization options there are three possible major upgrades to Skyhold available. These upgrades can be unlocked by meeting the necessary quotas at the Requisition table. All upgrades reward +1 power.

For all major upgrades available to Skyhold, see Major Upgrades.

All of the following songs can be heard in the Herald's Rest Tavern:

The Breach and Inquisition formation

Siding with the Templars

Siding with the Mages

The Siege of Adamant Fortress (a)

The Siege of Adamant Fortress (b)

The assassination of Empress Celene (a)

The assassination attempt on Empress Celene (b)

All four possible configurations of the Fresco

1) The explosion at the Conclave. A blast on the hill. It explodes outwards and jets up into the sky. In the sky in the sphere is the Fade; the Black City in the center; and the formation of the Inquisition. A pack of wolves howling defiantly against the world, beneath the blade and all-seeing eye of the Inquisition’s symbol.

2) Siding with the Templars. Next to the turrets of Therinfal Redoubt, Envy lurks. Grasping hands and the flaming sword of the Templar sigil.

3) Siding with the mages. A figure in Tevinter gear and iconography - serpents - Alexius. In the distance are the two versions of Redcliffe Castle, including the red and black iteration from the nightmare future scenario.

4) The attack on Haven. Corypheus, orb in hand, presides over the burning and sacking of the village in the mountains.

5) The Siege of Adamant Fortress. Adamant Fortress is in the distance. To the right is the black rocky crags of the Fade. The Black City rests at the center of the sphere; Nightmare’s multiple eyes stare balefully. Appears if done before Wicked Eyes and Wicked Hearts.

6) The Siege of Adamant Fortress. Adamant Fortress is in the distance. To the right is the black rocky crags of the Fade. The Black City rests at the center of the sphere; Nightmare’s multiple eyes stare balefully. Appears if done after Wicked Eyes and Wicked Hearts.

7) The assassination of Empress Celene. An assassin lurks in the window of the Winter Palace, dagger in hand. The figure in blue is wearing Celene’s iconic blue dress with gold collar. The palace is dark due to what has occurred. Appears if done before Here Lies the Abyss.

8) The assassination attempt on Empress Celene. The assassination plot, represented by an assassin with dagger in hand, has been brought to light. The figure in blue is wearing Celene’s iconic blue dress with gold collar. The lighted palace and full ballroom show that the plot has failed. Appears if done after Here Lies the Abyss.

9) The Temple of Mythal. In the halls of Mythal’s temple, a figure dressed like Abelas guards the blue ripples of the Well of Sorrows. The arch could feasibly represent Mythal’s last Eluvian.

10) Unfinished panel meant to commemorate the final battle against Corypheus.[11] A wolf stands over the body of a dragon, slain by the sword.
This section contains spoilers for:
Dragon Age: Tevinter Nights.

The plot follows BioWare's own canon, meaning it may not follow some of the player's choices in the games.
Several years after the end of the War against the Elder One, an attempt to restore the frescos resulted in a demon of Regret forming out of the plaster. The frecos were destroyed.[11]

Codex entry: A Fine Time to Close a Border

Codex entry: The Champion of Kirkwall

Codex entry: The City-State of Kirkwall

Codex entry: How to Act Fereldan

Codex entry: The Rotunda and the Fresco

Codex entry: What is Green?

Codex entry: The Women of All War

Codex entry: Take Back the Sky: A Tavern Cheer

Codex entry: Vashoth: The Grey Ones

Another Note from the Skyhold Kitchens

Bride of the Maker

Construction Report: Death on the Wall

Letter to an Inquisition Agent

A Message from Blackwall (deeply sorry)

A Message from Blackwall (honor to serve)

A Note from the Skyhold Kitchens

Note from the Skyhold Kitchens, Again

On the Condition of Your Charges

The View of the Troops

Yet Another Note from the Kitchens

Sera's Cabinet of Wonder Whose It Was 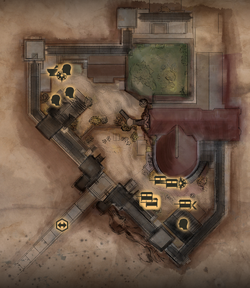 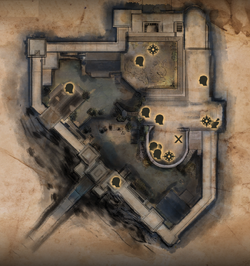 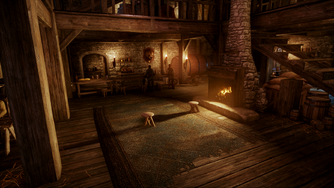 Inside the Herald's Rest 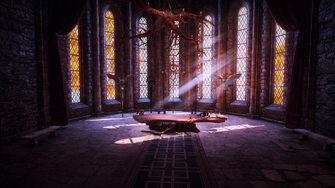 Inside the War Room 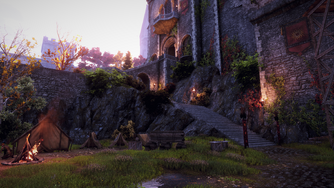 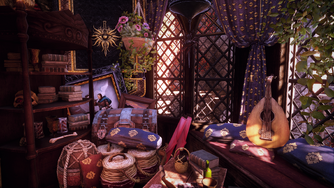 Inside Sera's room in the Herald's Rest 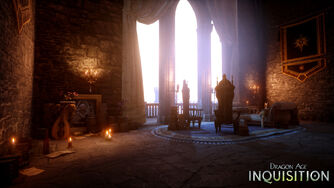 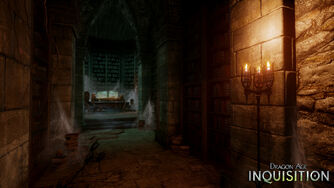 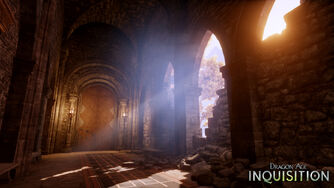 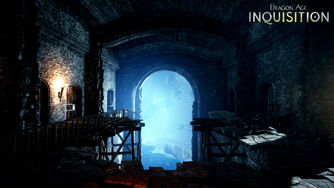 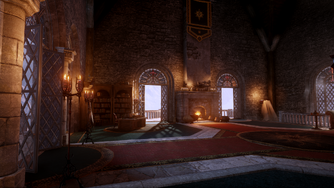 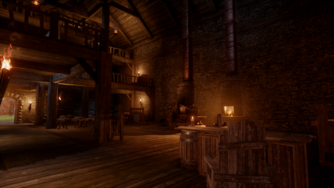 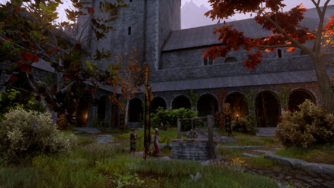 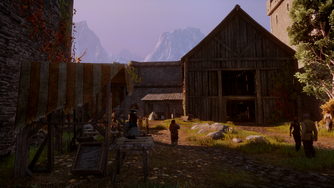 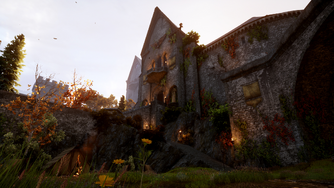 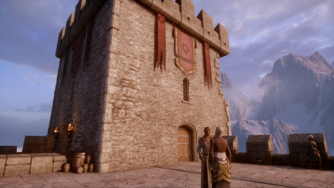 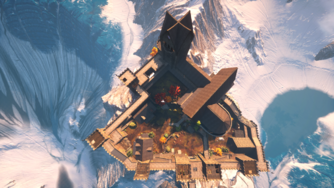 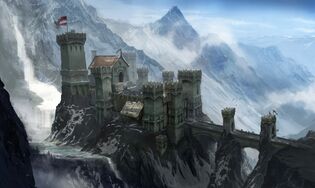 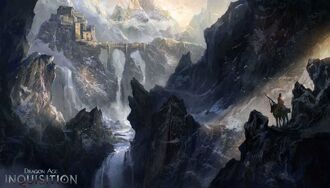 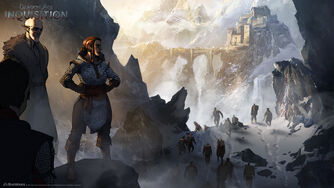