Sketch of Calenhad's Foothold is a side quest in Dragon Age: Inquisition.

This sketch of a castle on a rocky ridge marks a spot along a broken wall.

This sketch is located near a corpse located just south of the Outskirts Inquisition Camp. Picking up the sketch triggers the quest.

Climb the rubble ramp and jump up the partially fallen wall on the west side to get to the upper level. Descend the ladder and use the search function to reveal the treasure cache hidden in the rubble (see Gallery below). 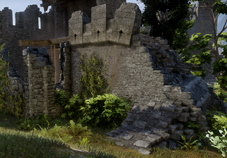 Sketch location
Add a photo to this gallery
Retrieved from "https://dragonage.fandom.com/wiki/Sketch_of_Calenhad%27s_Foothold?oldid=890059"
Community content is available under CC-BY-SA unless otherwise noted.