Skeletons are exactly what they sound like: animated piles of bone controlled by a demon. Skeletons simply attack all living targets and continue to do so, never wavering until they are smashed to pieces.

The demons of the Fade are jealous of the world they sense from across the Veil. They constantly push against the boundaries of the Fade, and when they finally cross over, they attempt to possess the first living creature they see. They are unable, however, to distinguish that which was once living from that which still is... in fact, a corpse provides an even more tempting target to a weaker demon as it has no will with which to resist the possession. The demon cannot rationalize why this is so; it only sees a target and grasps at the opportunity.

A skeleton is exactly that: a corpse animated by a possessing demon. Upon finding itself trapped within a body that cannot sustain it, the demon is driven insane... it seeks to destroy any life that it encounters, attacking without thought to its own welfare.

The exact names given to skeletons of this type vary according to the nature of the demons that possesses it. A "fanged skeleton" is a skeleton possessed by a hunger demon. These skeletons devour whatever life they encounter and often possess the ability to drain life energy and mana from their victims. A "shambling skeleton" is a slower-moving skeleton possessed by a sloth demon, able to bring entropic powers against its opponents, slowing them and even putting them to sleep. More powerful demons have been known to command skeletons, but at that level they are known by other names: revenants and arcane horrors, to name two.
—From Codex entry: Skeleton

Skeletons are mindless creatures that wander aimlessly, or lie dormant near the site of their “first death” till living beings walk near. If they originally came from a battlefield and have a weapon, they will attempt to use it. Otherwise, they’ll simply claw at their foes with broken finger bones, gouging away any flesh they can reach.[1]

Skeletons are called different names depending on the weapons they fight with:

Note: Some skeletons encountered will lack any further labels and will often use the same skills, equipment and weapons as those named above. 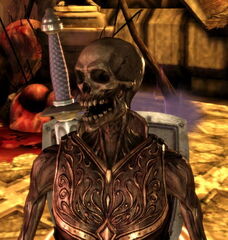 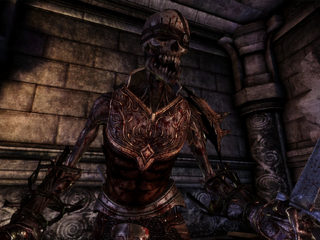 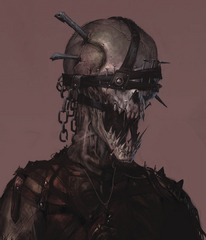 A Fanged Skeleton close up[2] 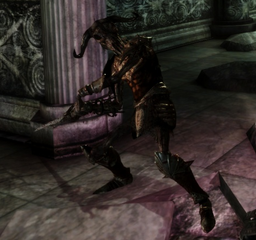 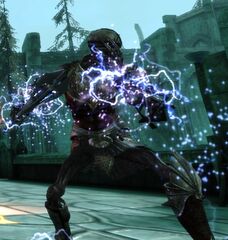