The Silent Sisters is a fighting order of female dwarven warriors in Orzammar dedicated to unarmed combat.

This order was founded after the death of Astyth the Grey, a dwarven warrior, who first fought for women's right to be soldiers. When no one listened to her words, she cut out her tongue and dedicated herself to training until she won a Grand Proving bare-handed. She posthumously became a Paragon at 1:95 Divine after she sacrificed her life to save the king of Orzammar.[1][2]

The women who join this order cut out their own tongues in honor of the sacrifice of Astyth the Grey, the first female Paragon of the warrior caste. The Silent Sisters always keep the knife they use to cut out their tongues, though they never use it as a weapon.[3] When they fight in Provings all Silent Sisters dress and look alike.[4]

They are sworn to never make a sound, even when they experience great pain, and thus are rendered mute. Silent Sisters have been known to use a form of sign language.[5] Subsequently, they require translators, such as Farinden. As they are viewed as extremists even among women, not all female warriors are members of this order.[3]

A dwarf's caste plays no part in whether one can join the Silent Sisters as they accept all women so long as they can prove themselves.[3] The joining process itself is called "blooding". This is completed when a recruit takes her vows of silence by cutting out her own tongue and defeating opponents in the Provings. Silent Sisters cannot be defeated in these matches so they fight until death.[6]

This section contains spoilers for:
Dragon Age: Origins.
The Silent Sisters are ardent supporters of the current royal House Aeducan and subsequently support Prince Bhelen Aeducan as the next king after the death of King Endrin Aeducan. The Dwarf Commoner will fight and kill Lenka during the Proving Loyalties quest, while the Warden can fight Hanashan in round three if the former fights as the champion of Lord Harrowmont as part of the quest A Lord's Trust: The First Task. 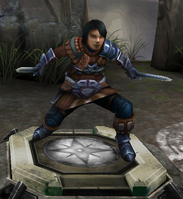 A Silent Sister in Heroes of Dragon Age 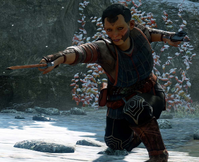 Belt of the Silent Sisters

Retrieved from "https://dragonage.fandom.com/wiki/Silent_Sisters?oldid=875709"
Community content is available under CC-BY-SA unless otherwise noted.