For the comic in which this location is featured, see Dragon Age: The Silent Grove.

The Silent Grove is a sanctum deep within the forbidding Tellari Swamps of Antiva.

The Silent Grove is haven for dragons, built following the collapse of Tevinter. The civilized world is ignorant of the Grove's existence, along with its keeper, the feared and enigmatic Yavana, a Witch of the Wilds.

King Alistair of Ferelden, the pirate Isabela and the merchant Varric Tethras are led to the Grove by Yavana, who tells them it exists as a haven for dragons from the ignorance of mankind. She explains that it was built by those who knew that dragons would need protection, and that if dragons were wiped out it would be a tragedy that would destroy mankind. Then Yavana demands that they leave and enters the columned building. A high dragon sits on the rooftop, and the adventurers have to turn away.

After Alistair is captured by Prince Claudio Valisti, Isabela and Varric return to the Grove and enter the building. They see Yavana sitting near a large well with stairs leading down into the darkness. They ask for her aid and she bestows a magical enchantment on them, instantly healing Isabela's wounds. They leave to free Alistair.

After Isabela and Varric kill Claudio and his men and Yavana interrogates Claudio's spirit to determine who his patron is, Yavana says that they deserve one more chance and leads the trio back to the temple. She allows Alistair alone to follow her down the stairs, claiming that Alistair's "future lies below."

Watched by a high dragon, they enter a huge cavern bathed in a blue glow and full of crystalline eggs. Yavana explains that they are in the Hall of Sleepers: when dragons were almost extinguished the few that remained were called by the builders of the temple to rest in it until awakened by power. Yavana revived a few that didn't die in their sleep and they became the first dragons to roam Thedas in many ages. But the great ones were beyond her reach until Maric arrived: the blood of King Calenhad called to the queen of dragons and awakened her. Yavana asks Alistair to awaken the last of the Great ones, thus absolving Maric of his promise to Flemeth. She tempts him with the suggestion that once recovered Maric can reclaim the throne and Alistair will be free of the unwanted burden of kingship. Alistair rejects her offer, saying that his purpose is justice, and runs Yavana through with his sword. Standing over her body he explains his actions: the machinations of the Witches of the Wilds to claim Maric, taking him from Alistair, Cailan and Ferelden itself, resulted in chaos and "everything that happened to my country is because of you." Before leaving Alistair challenges the watching dragon but it does not harm him due to the power in his blood. As he leaves the cavern the dragon examines Yavana's body.

Outside, Alistair explains to Isabela and Varric that he slew Yavana and the group proceeds onward to track Aurelian Titus, Claudio's patron. 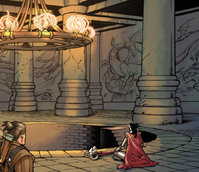 Varric and Yavana inside the temple

The Hall of Sleepers
Add a photo to this gallery
Retrieved from "https://dragonage.fandom.com/wiki/Silent_Grove?oldid=711233"
Community content is available under CC-BY-SA unless otherwise noted.