“In the Legion, death looms over us constantly, like... like a dirty uncle. Here, death seems distant.”

Sigrun is a casteless dwarf and a Scout in the Legion of the Dead. She is a potential companion in Dragon Age: Origins - Awakening.

Sigrun was born in Orzammar's Dust Town. She lived with her mother Jana in a little shack that they shared with Jana's brother, Boro, his wife, and four children. Jana made some coin helping merchants unload brontos, but not enough to adequately provide for her daughter. Sigrun started begging as a child, and eventually became a thief.[1]

A local store owner, Mischa, once caught her stealing a leg of nug once. She was sympathetic to the plight of the casteless, feeling that they turned to crime because most other options of supporting themselves were closed to them. Instead of telling the shopkeeper, she paid for the stolen goods and gave Sigrun a job at her shop in the Commons. Since then Mischa employed Sigrun in her shop and constantly sent her for errands in order to keep her occupied; some of those errands brought her to Janar. Sigrun believes that Mischa kept her occupied because she believed if the casteless were left idle, they would return to their former state of criminal behavior. One day, a statuette of the Paragon of House Bemot was stolen; Beraht, the Carta's boss, forced Sigrun to hide the statuette in Mischa's shop. According to Sigrun, he threatened to kill Mischa if she didn't do as he said. Eventually it was discovered and Mischa was exiled to the surface for theft, though she could also have been executed for this crime. According to Sigrun, she was afraid to admit that she was responsible for this crime because Beraht would have killed her.

After this incident, with her mother dead and her uncle unwilling to take her back, Sigrun joined the Carta. She considered working as a Noble hunter but she had neither the looks nor the temperament so she worked as a thief operating in certain parts of the Commons. She was doing well for herself until she got caught attempting to steal a ruby-encrusted purse from Damira Helmi. The guards chased her throughout the Commons; when they caught up with her she fought back and accidentally caused the death of one of them. It was either execution or the Legion for Sigrun; she chose the Legion of the Dead.

After joining she was befriended by Varlan Vollney, a fellow Legionnaire formerly of the Noble caste. He taught her how to read and write. Varlan eventually died in Kal'Hirol and Sigrun took his signet ring as a memento of her lost friend.[1]

Sigrun is encountered during the main quest Last of the Legion. Sigrun is part of the Legion of the Dead battalion sent to investigate Kal'Hirol. The Legionnaires are ambushed by the Mother's darkspawn and Sigrun manages to survive the battle and attempts to flee but is captured by the darkspawn just outside the thaig's entrance in the Knotwood Hills. The Warden-Commander and the Grey Wardens arrive just as Sigrun is being dragged back underground and liberate her from her captors. Sigrun asks the Warden-Commander to let her join them in attacking Kal'Hirol as she wants to fight the darkspawn who are responsible for slaughtering her group in the Deep Roads. Sigrun explains that she suspects the darkspawn are breeding an army in the Lower Reaches of the Great thaig. If the Warden-Commander agrees to permit Sigrun to accompany them, she will join them in killing four broodmothers in Kal'Hirol who were breeding darkspawn for The Mother's army.

Afterwards, Sigrun intends to leave for the Deep Roads to hunt darkspawn until she is killed, thus fulfilling her oath to the Legion. The Warden-Commander may persuade Sigrun to join the Grey Wardens instead, since she would still be combating the darkspawn and be more effective at doing so. If persuaded, Sigrun survives her Joining and becomes a full fledged Grey Warden.

Once her approval is high enough, if brought to the City of Amaranthine, Sigrun will encounter Mischa, who angrily curses at Sigrun for her fate. After hearing her story, the Warden-Commander can convince Sigrun to attempt to make amends with Mischa. Sigrun apologizes to Mischa, offering her Varlan Vollney's gold signet ring as a token of apology. The Warden-Commander may allow this or offer a considerable sum of sovereigns instead to Mischa, allowing Sigrun to keep her memento.

When word reaches Vigil's Keep that the Darkspawn are launching an all out assault on the City of Amaranthine, Sigrun immediately volunteers to join the Warden-Commander in the battle.

If brought along to Drake's Fall, Sigrun will object to sparing the Architect; however she can be persuaded or convinced that it is for the best.

Last of the Legion

Mark of the Legion

As you befriend Sigrun and gain her approval, she will gain the following additional skills:

Below are the spots where dialogue may be initiated with Sigrun. On the PC, it may sometimes be hard to find the correct spot to do so; make sure to press "tab" and rotate the camera if the relevant trigger is not possible to select. 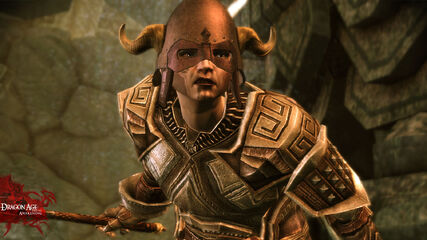 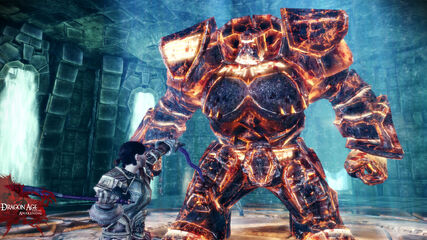 Tier progression of Sigrun in Heroes of Dragon Age