The Serpent of Nevarra
The Name of Our Enemy

Sidony is a player-controlled protagonist in Dragon Age: Inquisition's multiplayer.

Raised in secret in Nevarra by a Mortalitasi mage, Lord Henrik,[1] Sidony was brought up to revel in her magical abilities. She feels no kinship with mages who do not share her pride, and she has little but disdain for most other people. Sidony's only goal is to uncover her true potential as a mage, so she hungers for magical knowledge. When news of The Breach reached her, she headed directly to see it for herself, hoping that whatever secrets it held would be the key to her advancement.[2]

Sidony is involved in various war table operations. Though she can sometimes be seen on the battlements with two other agents, near where Cullen is stationed, she can't be spoken to.

Cassandra Pentaghast orders Sidony to return to Nevarra City to investigate rumors of a Mortalitasi plot to assassinate a member of Nevarra's unstable line of succession. Upon her return, Sidony finds out that her former mentor, Lord Henrik, the man who tipped the Inquisition of the plot, has been murdered. Eventually, Sidony discovers that Nicolas Reinhardt attempted to frame her for the murders of several nobles to cause backlash against the Mortalitasi, while the Mortalitasi mage Antonia killed Henrik and used her to uncover Reinhardt's plot to strengthen the Mortalitasi. Sidony kills Reinhardt and Antonia in retaliation.

The Serpent of Nevarra (war table)

The Name of Our Enemy (war table) 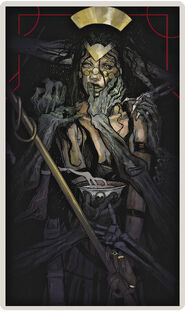